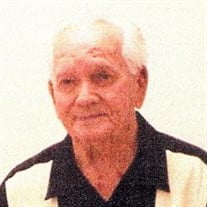 James F. Pollard, age 91, passed away on October 16, 2018 in Conroe, Texas. He was born on August 17, 1927 in Slagle, Louisiana to James and Ola Mae Pollard and was raised in Leesville, Louisiana. He grew up with 8 brothers and sisters and picked up music by ear learning to play the guitar and the violin, or fiddle as he called it. He worked for Continental Can Co, which later became Crown Cork and Seal and never missed a day in his entire life. He raised three children with his first wife, Emma Jean, and loved being a grandfather to their 5 grandchildren. Later in life, James married Debbie Lee Dallas and embraced her 3 children, 6 grandchildren and 2 great grandchildren. They all accepted and loved him dearly as he did all of them. The patriarch of our family, he was one of the finest men ever to be. He will be missed greatly in this world leaving a huge hole in our hearts as he was loved by many and an inspiration to us all. He will never be forgotten and will be remembered with the fondest of memories. James loved hunting and fishing. He was faithful to church and to God and went every Sunday until he could go no longer physically. He played music, mainly guitar, in all of the churches he was a member of from childhood until 3 months prior to his death at Faith Temple in Porter, Texas. He was preceded in death by his first wife, Emma; their daughter, Darlene Gardner; and his brothers and sisters. He is survived by his wife, Debbie, her 3 children, 6 grandchildren and 2 great grandchildren; his son, Steven Pollard; daughter, Gloria Lang and her husband Michael; grandchildren, Sandra, Winston, Steve, Robert and Cloyce Wayne and their spouses; 15 great grandchildren and 5 great great grandchildren. Graveside services and burial were held on Friday, October 19, 2018 in Brookside Memorial Park.

James F. Pollard, age 91, passed away on October 16, 2018 in Conroe, Texas. He was born on August 17, 1927 in Slagle, Louisiana to James and Ola Mae Pollard and was raised in Leesville, Louisiana. He grew up with 8 brothers and sisters and picked... View Obituary & Service Information

The family of James F Pollard created this Life Tributes page to make it easy to share your memories.

Send flowers to the Pollard family.