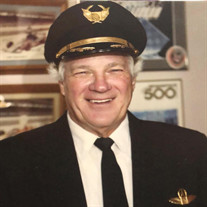 BUICK, James, (Jim) Joseph, December 14, 1940-September 5, 2020; born in Omaha, Nebraska. Survived by: Stacey Buick, wife; children: Lance Buick (Renee), Shane Buick, Stephaney Buick, J.P. Buick (Natalie). Grandchildren: Shannon, Jessica, Dylan, Delani, Matthew, Mitchell, Tove, Brittany. Great Grandchildren: Brayden, Adriana, Jayden, Jaysen, Ivy, Asher and sister, Jody Buick Renner, and nieces and nephews. Jim and Stacey, who was the love of his life, had just celebrated their 54th Wedding Anniversary, August 26th! Jim Buick was a renaissance man who could do anything he set his mind to. He played Gibson bass guitar in a band in his younger days and always had a affinity for music. Evening building his own amps. He still loved to play guitar and collected guitars for when he was going "back on the road!" Shortly after Jim and Stacey married he decided he wanted to be an airline pilot, so they moved from Omaha to Denver where a few airlines were based. For the next few years he diligently worked on getting his ratings, paying for each of them personally. He worked for Cessna Aircraft as a multi-engine rep who sold more airplanes in one year than any other reps had in the previous 3 years. They bought their first home in Arvada, Colorado in 1972, while expecting their second child, when he was offered a promotion to move to Wichita with Cessna; Stacey was not enthused, LOL, so they remained in their new home in Arvada which turned out to be providential. Jim was 31 years and 9 months old in September when he got a call from Frontier Airlines to come in for an interview which resulted in reporting for the first class hired in five years at Frontier; Jim would have turned 32 in December which would have disqualified him from being hired. The first opportunity Jim had to show his “building” abilities was right after training at Frontier when he was on reserve, sitting at home looking for things to do. Because we hadn’t qualified before the builder poured the foundation, he put 8’ side walls for a basement, but we had only qualified for $29,000, at 11% interest, so the builder filled in the basement with dirt. Jim decided to dig out the dirt and have a basement! He had to “hang” the furnace, re-plumb the entire house, change the wiring, and get the dirt out using a crawl space opening 4’x4’, then pour concrete back in the same opening. He not only did all of that, he moved the washing machine and dryer to the “basement” and he had a $1.00 bet with our nextdoor neighbor about when the project would be completed, which he WON! From that experience, Jim wanted to move to acreage and build his family a house which we sat down and designed ourselves. We sold our home in Arvada, all four of us moving into a 12’x50’ mobile home, and started building the 5000 sq foot house with a 4+ garage on 11 acres. Jim first established the boundaries by building a fence; then he built a pole barn, lifting huge poles by himself in the cold and snow of Colorado. Jim worked on building the house for 6 months, then Frontier scheduling would call and tell him he had to come in for 3 touch and goes; then he’d shave, go in to Frontier to satisfy the requirements, come home and start again. Eventually he built an incredible home that his family enjoyed for years. He then decided he wanted to go racing. He started with Formula Ford, moving to Super Vees and Formula Atlantics, eventually qualifying for the Indianapolis 500 in 1981. He was bumped, but the Buick Racing Team attempted to make the race again in 1983. We then went to AIS racing; then following the “racing prints” of the Indy tradition, we went to the inaugural race at Disney World, but didn’t get to qualify because of engine problems. Jim went on to mentor future race car drivers in the AIS program. Jim’s career with Continental Airlines brought Jim and Stacey, along with their daughter Stephaney and her two sons, Matthew and Mitchell to Houston/Montgomery, Texas in 1996. Jim worked in the training department, first as a ground school instructor, then a Sim instructor and eventually becoming a Check Airman, all on the 737. They built a home on Lake Conroe in the Bentwater subdivision, where they lived for 23 years. He first retired in 2000, with the greatest week long celebration, which included a personalized hilarious skit by his sisters and niece; he stayed on with Continental with the Gummers (Flight test pilots) until 9/11 when he fully retired from Continental. However his flying career didn’t end. He started flying commercially for Ron Rhodes, owner of System Painters with a King Air! They had many adventures and became great friends. When Ron sold his business Jim started flying for the Spearman Group flying a Piaggio, the fastest high performance aircraft, becoming the oldest pilot in the country who was able to check out yearly and be insured on this “High” flying airplane! In April, 2018, Jim joined an elite group of pilots when he received the Wright Brothers Master Pilot Award, which was a great honor capping off a fabulous 59 year aviation career. A celebration of life will be held at 3:00 PM, Saturday, September 12, 2020, North Shore Church, 18501 FM 1097, Montgomery, TX. In lieu of flowers, please consider donating to: N U Foundation Aviation Institute Fund, for a Flight Training Scholarship in memory of Captain Jim Buick. You may mail check donations to: Dr. Rebecca Lutte, 11452 Grand Pine Drive, Montgomery, TX, 77356. The service will be live streamed for those unable to attend at the link: https://www.youtube.com/channel/UCAiGCZN5c1zK4n7v9Wypgtg

The family of James (Jim) Joseph Buick III created this Life Tributes page to make it easy to share your memories.

Send flowers to the Buick family.