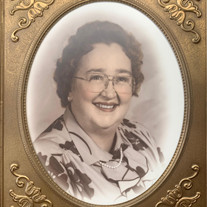 Jacqueline Louise Capel McBride, age 90, passed away on June 4, 2020. She was born on January 15, 1930 in Iota, Louisiana and graduated from Crowley High School in 1947. Jackie married Joseph Timothy McBride on July 12, 1950 and they lived in... View Obituary & Service Information

The family of Jacqueline Capel McBride created this Life Tributes page to make it easy to share your memories.

Send flowers to the McBride family.