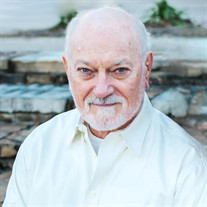 Jack Rousseau Nickel slipped the surly bonds of Earth one final time and took off into eternity on November 30, 2021. He was born on June 25, 1937, in Fort Wayne, Indiana, to Lois and Jack Nickel. He was the oldest of five children. He was a 1959 graduate of the United States Naval Academy. Upon graduation, he entered the United States Air Force and entered flight training at Moore AB in Mission, Texas. While stationed there, he met Linda Lee Miller who became his wife of 56 years. They had four children, Lisa Anne Nickel, James Bowman (Kristi) Nickel, Lee Andrea (Brett) Garner and Laurie Amera (Justin) Shults. During his Air Force career, Jack held several command positions including those of civil engineering, aircraft maintenance and flying squadron commander. He flew the C-130 aircraft around the world and in more than two hundred combat missions in Vietnam. He earned a Master of Engineering degree from Texas A&M University and was a registered Professional Engineer in Texas. After serving his country for twenty years, Jack retired from the U.S. Air Force and worked as an engineer. He was active in church and related functions, especially Walk to Emmaus and Bible Study Fellowship. Jack loved and served his country with distinction and honor, but his highest priorities were his family and Christian faith. Jack is survived by his wife, Linda; their four children; his grandchildren, whom he adored: Elena Chahin, Lucia Chahin, Grant Nickel, Madelynn Nickel, Peyton Nickel, Brandon Garner, Grayson Garner, Ava Garner, Alex Garner, Katherine Shults, William Shults, and Bennett Shults; his two sisters, Bobbie Sanders and Penny Washburn; and brother, Terry Nickel. He was preceded in death by his parents and sister, Pat Wiggins. A celebration of life and reception will be held at 10:30 am on Thursday, December 9, 2021, at The Woodlands Methodist Church, 2200 Lake Woodlands Drive, The Woodlands, Texas 77380. Final salute and burial will be held at 2:15 that afternoon at the Houston National Cemetery, 10410 Veterans Memorial Drive, Houston, TX 77038. In lieu of flowers, the family suggests gifts be directed to The Woodlands Methodist Church Missions Fund. Please comment In Memory of Jack Nickel/Craft Circle either online at thewoodlandsmethodist.org/givetoMissions or by mail at TWMC/ Mission Memorial Donation, 2200 Lake Woodlands Drive, The Woodlands, TX 77380. Those wishing to watch the services remotely may do by following this link. https://tinyurl.com/yyvbuyum Pallbearers will be his six grandsons. Death is not extinguishing the light; it is just turning off the lamp because the dawn has arrived. Blue skies.

Jack Rousseau Nickel slipped the surly bonds of Earth one final time and took off into eternity on November 30, 2021. He was born on June 25, 1937, in Fort Wayne, Indiana, to Lois and Jack Nickel. He was the oldest of five children. He was... View Obituary & Service Information

The family of Jack Rousseau Nickel created this Life Tributes page to make it easy to share your memories.

Send flowers to the Nickel family.