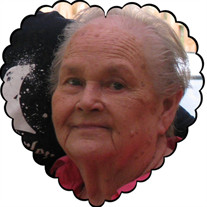 Iva Ruth Wilson Brown went to be with her Lord and Savior August 1, 2014 with her loving daughters, sister, and a niece at her side. She was born on April 18, 1934 in Conroe, Texas to Allen Oliver and Vinnie Wilson. She was preceded in death by her husband, Archie; son, Michael; parents, Allen and Vinnie Wilson; brothers, Tilmon, Wallace, William (Dub), Lee, and Allen, Jr. and sisters, Velma Hall and Lucy May Kelly. She is survived by her daughters, Diane Wood and husband Charles, Sandy Glisson and husband Jim, Brenda Brown, and Susie Brown all of New Waverly; six grandchildren, Chad Wood and wife Amy, Jared Wood and wife Erica, Eric Wells and wife Alison all of New Waverly, Wes Glisson and wife Amy of Washington DC, Dustin Glisson and wife Tiffany of Grapevine and Mandy Hatch and husband Tyler of Conroe; great-grandchildren, Madison Wood, Cody and Kaylin Glisson, Kinley Wells, and expected soon baby Wood; sister, Shirley Samford of Tenaha; sister in law Hazel Franks and husband Joe of San Antonio and many nieces and nephews. Iva Ruth grew up in Conroe where she met and fell in love with her friend Hazel’s brother Archie and married him on May 19, 1951. As teenagers Archie, Iva Ruth, Hazel and her boyfriend Joe would double date, often times sneaking out a log truck belonging to Archie and Hazel’s dad. Iva Ruth and Archie moved to New Waverly in 1962 where they owned and operated Brown Lumber Co. She lived a long, fun-filled life where she was always surrounded by family and friends who would all agree she was the life of the party. She was active in her church and while her five children attended school she spent many years involved in the athletic/band booster club, PTA, served as a room mother and a Girl Scout leader. She loved spending time with her family and friends, playing card games, and was known by many as a consummate baker. She was a beautiful wife, loving mother, grandmother, great grandmother and friend. She will leave a void in our lives, but the memories of her will be with us forever. Her life will be celebrated in a memorial service at 11:00 A.M. on Wednesday, August 6, 2014 at the First Baptist Church in New Waverly, Texas. In lieu of flowers you are invited to make a donation to the National Breast Cancer Foundation – www.nationalbreastcancer.org

Iva Ruth Wilson Brown went to be with her Lord and Savior August 1, 2014 with her loving daughters, sister, and a niece at her side. She was born on April 18, 1934 in Conroe, Texas to Allen Oliver and Vinnie Wilson. She was preceded in death... View Obituary & Service Information

The family of Iva Ruth Wilson Brown created this Life Tributes page to make it easy to share your memories.

Iva Ruth Wilson Brown went to be with her Lord and Savior August...