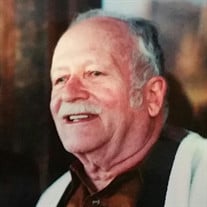 Herman was born in The Bronx NY on September 4th 1923. He grew up in Allendale NJ. He loved listening to the trains go by from his bedroom window. This started a lifelong fascination with trains of all types. He graduated from Ramsey High School as the valedictorian on June 19th 1941. He went on to receive his Bachelor of Arts, Masters, Bachelor of Laws and Masters in Law degrees from Columbia University. Herman enlisted in the US Army on May 8th 1943 with the 1259th Engineer Combat Battalion, reached the rank of Sergeant, served in France and was honorably discharged on February 15th 1946. One interesting item is that while in France he was bunked on the ship USS President Warfield, which later became the ship used in the famous SS Exodus incident which was later made into a movie. He married Virginia Gough on March 13th 1949. Together they shared a love of skiing, boating, horseback riding, hiking, camping, traveling and meeting people of all cultures and places. They also instilled a love of the outdoors in all their children. He served as a Boy Scouts of America troop leader and was a member of the Potomac River Jazz Club. He spent many summers with his family at Camp Chesapeake, part of the Coatesville PA YMCA, where he made many life long friends and great memories. He was one of the finest slide jazz piano players and had memorized hundreds of songs. He was a great family man and a wonderful friend to all who met him. Life was always an adventure with him. Herman was proud to have been a member of the Jewish faith. He had the ability to relate to people of all different faiths and beliefs. His door was always open. He had a long and distinguished career as a Lawyer, Management Analyst and manager. He worked for the law firm of Blank, Rudenko, Klaus and Rome in Philadelphia and spent 20 years with the US Department of Justice and the US Parole Commission in Washington DC. He was admitted to the New York Bar in June 1951, a member of the New York Court of Appeals in 1963 and a member of the Federal Bar Association in 1968. Herman was preceded in death by his wife Virginia Gough Levy, his dear companion later in life Thelma Back, his father Arthur Levy, his mother Gertrude Levy, his aunt Shirley Nathan and his uncle Sam Nathan. He is survived by his children Lata (Janet) Metro, Charlotte Levy, Henry Levy and Arthur Levy. He also had seven grandchildren including Rebecca Levy, Aaron Levy, Lee Chirtel, Sam Chirtel, Eric Chirtel, Nate Levy and Liz Levy. Contributions may be made in his name to the Chesapeake Bay Foundation: www.crowdrise.com/donate/charity/chesapeakebayfoundat/0 and enter HERMAN LEVY in the tribute box, or https://secure.cbf.org/site/Donation or by calling 1-888-728-3229.

Herman was born in The Bronx NY on September 4th 1923. He grew up in Allendale NJ. He loved listening to the trains go by from his bedroom window. This started a lifelong fascination with trains of all types. He graduated from Ramsey High... View Obituary & Service Information

The family of Herman Levy created this Life Tributes page to make it easy to share your memories.

Send flowers to the Levy family.