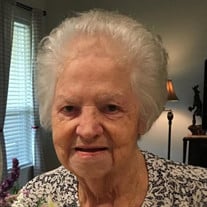 Hazel “Jaunita” Page Thomas, age 83, of Montgomery, Texas received her Angel Wings on February 22, 2022. Jaunita was born on February 3, 1939, the 2nd child and first daughter of Jeff and Hazel (Roberson) Page in Latexo, Texas. On April 20, 1962, she married Chief Robert (Bob) Coleman Thomas USN in Kountze, Texas. The military life took Bob and Jaunita on many adventures in the world while living in Alaska, California, Hawaii and many more. Jaunita loved and embraced being a military wife, which she did honorably until Bob’s death on January 14, 1979 after 17 years of marriage. In 1995, a handsome cowboy entered her life. Billy Byron Elrod swept her off her feet and their love made them inseparable for the next 27 years. Such a beautiful love story to see as they laughed, loved, traveled together and took care of each other. As she called him, “Her Billy” took care of “His Lady” during sickness and was lovingly at her side as she gained her Angel Wings. Many remember Jaunita as a barber and owner of Roffler Hairstyles by Jaunita for over 40 years. So many memories and stories told at that little barber shop on 34th Street in Houston, Texas. She was preceded in death by her parents, Jeff and Hazel Page; her late husband, Chief Robert (Bob) Thomas; a brother, Jesse Page; and two sisters, Mary Reynolds and Katie Findley. Jaunita is survived by her love, Billy Elrod; brothers and sisters-in-law, Robert and Dianne Page and David and Kay Page; sister and brother-in-law, Sally and Calvin Gurka; as well as several nieces and nephews. Jaunita, affectionately nicknamed “Nita Bug” by her family and “Miss Daisy” by her sister-in-law, will always be remembered for her sweet spirit, giving heart and beautiful smile. We Love You Sweet Lady, you will never be forgotten as we will always hold you in our hearts. A funeral service will be held at 2 pm on Monday, February 28, 2022 at Eickenhorst Funeral Services, 1712 N. Frazier and Wilson, Suite 115, Conroe, Texas 77301. Jaunita will be laid to rest with Bob in the Houston National Cemetery at 11 am on Friday, March 4, 2022.

The family of Hazel "Jaunita" Thomas created this Life Tributes page to make it easy to share your memories.

Send flowers to the Thomas family.