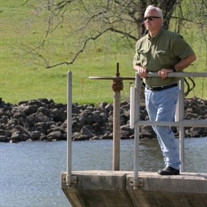 H. Reed Eichelberger (April 25, 1945-November 4, 2019)--Reed was born in Houston, Texas, to Ike and Maude Eichelberger. He died unexpectedly in his home of the last three years at Lake Possum Kingdom where he resided with his wife, Laura. With his heroes John Wayne and Gus McCray, he was a cowboy at heart and was living his Lonesome Dove style life with his “Laura darling.” With his sidekick of 21 years, he and Laura shared many passions in life including wildlife, nature, wine tasting, back-road adventures, trips to Angel Fire, and sitting on the front porch enjoying the views of sunrises and sunsets over Possum Kingdom Lake. Reed and Laura worshipped at First United Methodist Church in Conroe before moving to Montgomery. There they were active at both the Fellowship of Montgomery and Lone Star Cowboy Church. Most recently they have connected with a neighborhood small group from the HighRidge Church of Graham who have welcomed them with loving arms. Reed grew up in Pecan Park in southeast Houston with his parents and two younger siblings, Carol and Gary. It was a time when the neighborhood had no fences and the lawns ran together so the kids all played football, tag, hide and seek, red rover, and baseball. Reed also played first baseman on the local little league team. Reed could often be found in the company of his two buddies, Wayne Neeley and Billy Clark. One ill-advised B B gun contest cost Reed the sight in one eye which kept him from joining his buddies when they enlisted in the military at the height of the Vietnam War. Reed continued to consider them his life-long buddies. At an early age under the tutelage of his dad and Uncle James, he became a passionate golfer and participated in many golf outings and tournaments for both business and pleasure. Reed married his high school sweetheart and was blessed with two children, Jill and Wade. He was further blessed later in life when his soul mate, Laura, and her daughter, Emily, graced his life. His beloved family includes his wife, Laura, his children Jill Schweiker and husband, Brian; Wade Eichelberger; and Emily Hopping and husband, Tate; his brother, Gary and wife, Joan; sister, Carol and partner, Jean; sister-in-law, Karen Coleman and husband, Glenn; brother-in-law, Gary Sims and wife, Pattie. He was the proud grandfather to Austin Reed and Robert Cole Schweiker, and Creek Caldwell Hopping; along with many other loving family members. A graduate of Milby High School in Houston, he earned a Bachelor of Science in Civil Engineering (1967) plus graduate studies in Engineering Management (1981). He was a registered professional engineer with the State of Texas. He accumulated close to 50 years experience over his career in civil engineering including water resources, structure and foundation design, subdivision, hydraulics, waste water collection and treatment, roadway design and construction management. He was responsible for all aspects of project development including conceptual design, final design, production of drawings, bidding and construction phase services. He was qualified for project and construction management, cost development and contract negotiation. Over the course of his career Reed worked on projects for government agencies such as the City of Houston, Harris and Montgomery Counties, and various state agencies and departments. One of his favorite projects was the 69th Street Waste Water Treatment Complex which at the time of construction was the largest waste water treatment facility in the southern United States. He was active in many organizations and served on numerous committees. He also served as a member of the board of directors for both the Lone Star Ground Water Conservation District and the Texas Water Conservation Association and he was inducted into the Academy of Distinguished Civil and Environmental Engineers. Reed’s 15 years of service with the San Jacinto River Authority completed his career. He retired as General Manager in October 2012. Reed’s smile was as big and bright as his home State of Texas. He was gracious with all. His charm entered the room before he did. He looked for and brought out the best in those around him. Friends are invited to visit with the family from 2:00 PM to 4:00 PM on Sunday, November 10, 2019 at Eickenhorst Funeral Services, at Frazier and Wilson Rd, 1712 N Frazier St #115, Conroe, Texas 77301. The funeral service will be held at Lone Star Cowboy Church, 21267 Eva Street, Moontgomery, Texas 77356. In lieu of flowers, the family requests that donations be made to the Texas Parks and Wildlife in Reed's memory. https://tpwd.texas.gov/business/donations/

H. Reed Eichelberger (April 25, 1945-November 4, 2019)--Reed was born in Houston, Texas, to Ike and Maude Eichelberger. He died unexpectedly in his home of the last three years at Lake Possum Kingdom where he resided with his wife, Laura.... View Obituary & Service Information

The family of H. Reed Eichelberger created this Life Tributes page to make it easy to share your memories.

Send flowers to the Eichelberger family.