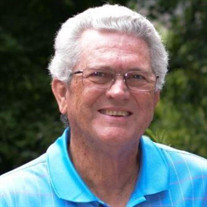 Guyron Brantley Laycock, age 82, passed away peacefully on September 6, 2021 at his home with his family by his side. He was born on July 19, 1939 in Pampa, Texas. Grew up in a loving home in the Texas Panhandle with one older sister. His father was a public-school administrator, and his mother was a homemaker who worked at the local bank. Grew up in White Deer, TX, and graduated third in his class from White Deer High School. He was the Senior Class President, was on the basketball team and in drama club, and he enjoyed golfing and skiing. Brant received his Bachelor of Arts in Mathematics from Texas A&M University and a Master of Science in Mathematics from Texas A&M University. He met his wife of 56 years while attending Texas A&M University. They married in 1963 and had three boys. He spent much of his time coaching all three boys’ various sports teams. He was commissioned as a 2nd Lieutenant in the Air Force. He also worked and taught in the NSA while serving in the Air Force. After his service, he had a distinguished career as a Computer Science Engineer and Proposal Manager for several gas and utility companies and ultimately retired from GE. He was very generous with his time and money. He volunteered at his church and with Habitat for Humanity and also served on several Former Student Committees at Texas A&M University. He believed in Jesus Christ as his Lord and Savior and attended The Woodlands First Baptist Church. Brant was preceded in death by his parents, Huelyn Weldon Laycock and Maudie Elizabeth Laycock; and his loving wife of 56 years, Mary Lindra Laycock. He is survived by his children, Drs. Stephen and wife Christine Laycock of Longmont, CO, Patrick Laycock and wife Dawnette of Conroe, TX, Brian Laycock of Colorado Springs, CO; grandchildren, Jason Brantlee Laycock of Conroe, TX, and Shailey Lindra Laycock of Conroe, TX; sister, Berdene Blair, of Amarillo, TX; as well as many other loving family members. A Celebration of Life will be held at 2:00 PM on Sunday, September 19, 2021 at The Woodlands First Baptist Church (South Campus), 11801 Grogans Mill Rd, Spring, Texas 77380. In lieu of flowers, the family asks that donations and contributions be made to The Woodlands First Baptist Church, Texas A&M Association of Former Students, Habitat for Humanity or Cal Farley’s Boys Ranch.

Guyron Brantley Laycock, age 82, passed away peacefully on September 6, 2021 at his home with his family by his side. He was born on July 19, 1939 in Pampa, Texas. Grew up in a loving home in the Texas Panhandle with one older sister. His father... View Obituary & Service Information

The family of Guyron Brantley Laycock created this Life Tributes page to make it easy to share your memories.

Send flowers to the Laycock family.