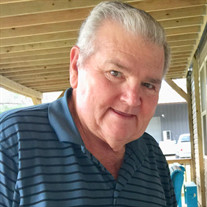 Gerald Harvey Cheatham, Sr. “Jerry”, age 77, went home to be with his Lord and Savior on Saturday, April 20, 2019 surrounded by his loving family. He was born on August 18, 1941 in Porter, Texas to Vida and William Cheatham. Jerry loved sports and played many throughout his childhood and schooling. He was a graduate and the class president of Montgomery High School Class of 1960. Growing up, country music was always a huge part of Jerry’s life. In fact, he had a band called “Jerry Cheatham and the Country Knights.” In his early professional career, he worked in construction and oilfield services. Later, he owned and operated Gerald Cheatham Logging Co. for many years. In 1999, he moved to Bolivar where he operated his own shrimp boat called “The Miss Molly” and the Bolivar Yacht Basin Bait Camp for five years. He began selling BBQ out of the bait camp and eventually opened Jerry’s BBQ after retiring from the bait business in 2006. He operated Jerry’s BBQ for 3 years before finally retiring to Dacus, Texas to live around family. However, Jerry’s true passions were for fishing, playing his guitar, cooking BBQ, and enjoying his grandchildren. During his years spent in Bolivar, he played bass guitar in the band at First Baptist Church of Crystal Beach. Most recently, he enjoyed running the live stream sound for Carbon Church’s online ministry. Jerry was preceded in death by his parents, William Harvey Cheatham and Vida Phillips Farmer; sister, Penny Cheatham; brother, Wayne Cheatham; son, Ronnie Phillips; grandson, Connor Phillips; daughter-in-law, Patricia Phillips. He is survived by his wife of 19 years, Cindy Cheatham; children, Molly Radford and husband, Neal of Montgomery, Gerald (Bo) Cheatham, Jr and wife, Angela of Dacus, Gary Phillips of Dacus; daughter-in-law, Lou Phillips of Dacus, Wesley Smith and wife, Sarah of Kingwood, Jason Smith and wife, Kristen of Montgomery, Steve Smith and wife, Holly of Kingwood; 15 grandchildren and eight great-grandchildren; numerous nieces, nephews and other loving relatives and friends that will miss him dearly. Friends are invited to visit with the family from 6PM to 8PM Wednesday, April 24, 2019 at Carbon Church, 115 Arapahoe Dr, Montgomery, Texas 77316. The funeral service will be held at 1PM Thursday, April 25, 2019 at Carbon Church. The graveside and interment service will be immediately following in Cartwright – Sunday Cemetery on Rabon Chapel Rd. In lieu of flowers, the family asks that donations and contributions be made in Jerry’s name to Carbon Church.

The family of Gerald Harvey Cheatham, Sr. created this Life Tributes page to make it easy to share your memories.

Send flowers to the Cheatham, family.