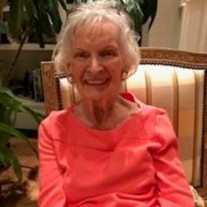 Georgia Belle Bronson Edmonds, age 92, passed away peacefully on February 28, 2020 in Katy, Texas. She was born on June 6, 1927 in Kingman, Kansas to Lulu Grace and William L. Webber. She was raised in Hutchison, Kansas and graduated from Hutchinson... View Obituary & Service Information

The family of Georgia Belle Bronson Edmonds created this Life Tributes page to make it easy to share your memories.

Send flowers to the Edmonds family.