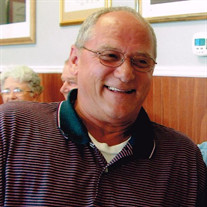 George Mitchell “Mitch” Hill, passed away peacefully on November 28, 2016 in Conroe Texas. Mitch was born October 31, 1946 in Prairie Grove, AR to George W. and Phyllis “Granny” Hill. He is a graduate of Siloam Springs High School in 1964 and is a Veteran, having served 13 ½ years in the Arkansas Army National Guard, Battery B 2nd Battalion 142nd Field Artillery. Mitch had a love of motorcycle racing and passed that love on to his grandson, Colten. He loved tinkering on his cars and was tickled every time his granddaughter, Erin, who would play in the oil while working in the garage with his daughter Amy. Going to breakfast and working on household projects bonded him with his son, George. He and his wife, B J were members of the Auxiliary to the VFW Post 4709 and were heavily involved in the support of our veterans. Mitch retired from Century Link Communication where he had worked for 36 years as a communications technician in Siloam Springs, AR. Prior to his phone work, he held several positions driving and working on big rigs for Kenneth Place and Carl Hill, and AW trucking, he did body work for AR White Freightliner with his brother, Steve, and then they did a little freelance body work together. Mitch met his soul mate, Betty Jo Sembera, in January of 2001 and they married December 10, 2005. Mitch was preceded in death by his parents and one son, George David. He is survived by his wife, Betty Jo, brother, Charles (wife Bernice), a sister, Beverly (husband Park) and brother Steve. At their marriage, each took as their own the children: George William (special friend Jennifer), Amy Michelle, Donnie (wife Susan), Jacque (hubby Bill), and grandchildren: Colten, Erin, Lonnie (wife Jesse) Krystal, Jonathan, Brent (wife Haley), John David and Angel, 12 great grandchildren and numerous nieces and nephews. Services will be officiated by Chaplin Rick Paige of VFW Post 4709. In lieu of flowers, the family has requested donations in Mitch’s honor be made to the VFW Post 4709 Auxiliary or VFW National Home for Children.

The family of George Mitchell Hill created this Life Tributes page to make it easy to share your memories.

Send flowers to the Hill family.