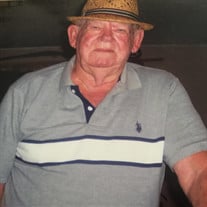 Gary Glen Young, age 81 of Grangerland, Texas, went to be with his Lord Wednesday August 10, 2016. He was born July 22, 1935 to Bud and Alva Dee Young in Palestine, Texas. He was raised with his two sisters and brother in Gallatin by Cliﬀord and Alva Gilliam. Glen was unique and experimented with a number of professions until he found his calling in life. First, as a mischievous young boy, he tried his hand at making moonshine while working at the tomato plant. When he realized that Al Capone had that market cornered, he then tried his hand at plowing but soon discovered that manual labor wasn’t for him. He obtained his driver’s license at age 14 and began driving a truck until his retirement at age of 70. As he always said, “God made us all for something. If he made you to be a ditch digger, then you need to be the best ditch digger you can be.” Glen, also known as “Whippoorwill” on the CB, enjoyed his work and seeing America during his travels in the truck. Glen’s other career was raising his 10 children. He married Geraldine at an early age and together they had Glen Alan, Glenda, Jerry, and Twila. He then married Jeanne and together they had Scott, Eric, Kyle, and Angie. He then married the love of his life, Mary and considered her kids Tillie and Sunny as his own. Glen and Mary’s 11th child is “Girlfriend,” their beloved Chihuahua. Glen is preceded in death by his birth father Bud Young, his step father Cliﬀord Gilliam and his mother Alva Dee Gilliam. He is survived by his wife Mary, sisters Wanda Smith and Alva Jean Gilliam, brother Danny Gilliam and wife. Children Glen Alan, Glenda, Jerry and wife Joanna, Twila and husband Steve, Scott and wife Tammy, Eric, Kyle and wife Sally, Angie and husband Michael, Tillie and husband Jeﬀ, and Sunny and wife Joni. Glen had numerous grand kids and great grand kids. He was affectionately known as Papa and Big G by his grand kids. The family will hold a private memorial service at 2 PM Saturday, August 13th at The Fellowship Church in Willis, Texas.

Gary Glen Young, age 81 of Grangerland, Texas, went to be with his Lord Wednesday August 10, 2016. He was born July 22, 1935 to Bud and Alva Dee Young in Palestine, Texas. He was raised with his two sisters and brother in Gallatin by Cli&#64256;ord... View Obituary & Service Information

The family of Gary Glen Young created this Life Tributes page to make it easy to share your memories.

Gary Glen Young, age 81 of Grangerland, Texas, went to be with...

Send flowers to the Young family.