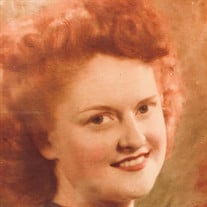 Frances Cecelia (Anton) Osborne, 99, passed away in Houston on May 22, 2021. She was born in Perry, Iowa on May 14, 1922. Frances was raised by loving parents in Sedalia, Missouri. Her father, Raymond Earl Anton, was a machinist for the Missouri Pacific Railroad for over 45 years, very proud of his craft. Her mother, Mary Eulalia O’Malley, was a loving homemaker. Frances dearly loved and was loved by her parents, her baby brother, Arthur David, and her baby sister, Eulalia. Even though growing up during the Depression, her childhood was nevertheless filled with family love and tender caring by her parents. Frances was a warm and outgoing child and had many friends. Frances attended Smith-Cotton High School in Sedalia, Missouri; Class of 1939. After graduating from high school she attended the local business college and worked for Prudential Insurance Company. Any dreams she may have had of a career in business or being a typing teacher were interrupted one evening at a USO dance where she was swept off her feet by a good-looking airman who was a great dancer! She married William Harrison Osborne of Illinois in 1942. They enjoyed a 46-year marriage before Bill’s passing in 1988. After the war, Bill and Frances began their married civilian lives in Pampa, Texas, and later moved to Kansas City, Missouri, where Bill made his career as a commercial driver. They welcomed the blessings of four children there: Billy Ray, Melody, Marilyn, and Tommy in a home purchased through the GI Bill. In 1962 Bill jumped at an opportunity to transfer to Texas; he and Frances never looked back. The dynamic Texas economy allowed them to realize a standard of living they had not previously enjoyed. To add to the blessings they found, Frances’ brother, Arthur David, and his family and her sister, Eulalia, and family joined them in Houston. Those days with her growing kids and close-by family were some of the happiest of her life. After Bill’s retirement, they enjoyed years of travel in their RV. Frances loved people and had a heart for helping. She began visiting residents of local nursing homes bringing smiles and relieving loneliness. She often wrote letters for them, that they were no longer able to write to their own families. Frances started helping at the North Channel Assistance Ministry distributing food and clothing to needy folks. She served there for over 30 years before her health led her to retirement at age 96. She was also a devout Catholic and was a parishioner at St. Andrew Roman Catholic Church in Channelview, Texas. Frances happily lived in the same house she and Bill bought in North Shore in 1964, a period of 57 years. Frances was known for her generous heart, quick smile, sharp wit, and love of Tex-Mex! She leaves a legacy of love and caring that her family and friends will always carry in their hearts. She is preceded in death by her parents, Raymond Earl Anton and Mary Eulalia O’Malley Anton; husband William Harrison Osborne; siblings, Dr. Arthur David Anton; Mary Eulalia Anton Maly; she is survived by her children, William Raymond Osborne and wife Bonita; Melody Joan Osborne Richards; Marilyn Sue Osborne Wisdom; and Thomas Robert Osborne; grandchildren, Bryan Anton Osborne and wife Kim; Anna Paige Osborne; Katie Ann Wisdom Hood and husband Miles; great-grandchildren, Lily Paige Osborne; William Blake Osborne; Charles Clayton Hood. Other surviving family members, sister-in-Law, Mary Sue Shy Anton; nieces Mary Beth Anton Papasakelariou and husband Cris; Jennie Maly McNamara and husband Lee; and nephews David Anton; Philip Anton and wife Yuri; Joseph Maly and wife Kathy; and Raymond Maly. Charities for contributions: St. Andrew Roman Catholic Church Home 827 Sheldon Road Channelview, TX 77530 (832) 452-9865 North Channel Assistance Ministry 13837 Bonham St, Houston, TX 77015 (713) 453-8028

Frances Cecelia (Anton) Osborne, 99, passed away in Houston on May 22, 2021. She was born in Perry, Iowa on May 14, 1922. Frances was raised by loving parents in Sedalia, Missouri. Her father, Raymond Earl Anton, was a machinist for the Missouri... View Obituary & Service Information

The family of Frances Cecelia Osborne created this Life Tributes page to make it easy to share your memories.

Frances Cecelia (Anton) Osborne, 99, passed away in Houston on...

Send flowers to the Osborne family.