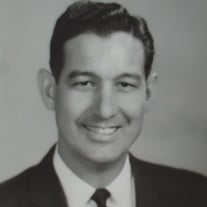 Eric Doyle Simmons was born January 18th, 1925 in Osyka, Mississippi. For 92 years, he was all about Family, Flying and Music. And if you met him and spoke with him for 5 minutes, you knew how passionately he “sold” his love of all three. Eric was born in his grandmother’s house to Eric and Myrtle and lived the life of a country boy, working in the garden with his mother and as a landscaping hand for his dad. He loved eating corn bread, beans and preserves. The last time he had a “best meal ever”, it included pork roast, black eyed peas, greens and corn bread. He always knew that the best tasting vegetables were grown in his garden. He attended Warren Eastern High School in New Orleans where his love of music was sprouting, but got back to the farm as often as he could. At age 18, in March of 1943, he was inducted into the United States Army Air Corp, in New Orleans. After a few weeks in Alexandria, LA he spent the next two years becoming a bomber pilot, an officer and a gentleman for Uncle Sam, living and flying in Alma, Oklahoma then all over Texas. He lived in Wichita Falls, San Antonio, Stamford, Sherman, Waco and finally Midland. His pride for his service, love of flying and love of Texas lasted his entire life. He did find time to play music with the Sad Sacks while he was in training at Northwest State Teachers College. He was discharged in December 1945. Eric returned to New Orleans and the two other loves of his life took root. He became an active member of the Merry Makers Big Band. At a practice, he met Betty Jean Arnold. Within a year, February 14, 1948, Eric and Betty were united and loved each other for over 70 years. They have sons; Donald Eric Simmons and Thomas Doyle Simmons; grandchildren, Michael Richard Simmons, Ashley Elizabeth Simmons Jones, Cristina Janice Simmons, Nicolas Thomas Simmons; and great grandchildren, Haley Ann Jones, Lani Faye Jones, Mia Renee Simmons, Addison Marie Bennett. His love of family and drive of responsibility drove his muse into the background, for a while. He put down his horn and embraced commercial food sales for a consistent pay check and a “supposedly” stable life. Eric grew thru his sales career to manager, district manager and eventually an owner of a brokerage firm. This stable life moved him and his beloved family from New Orleans to Monroe, LA, to Mobile, AL back to New Orleans then on to Nashville, TN to Louisville, KY and finally back to New Orleans. All the while the muse kept calling and caught him in Nashville. At an early age, his son Don showed great talent as a trumpet player and Eric parlayed that into his ticket back into the music world. He began “playing” alongside his son to help the lad, but soon began practicing in earnest to get his own “chops” back. As muses’ work, music kept “calling” from Tennessee to Texas, first thru an American Legion band in Nashville, then thru Shriner's bands, college bands, community bands and church bands. While playing professionally, he touched greats and near greats; Pete Fountain, Kenny Rogers, Harry Connick, Jr., Tommy Yetta, the Merry Makers, The Notables, the Crescent City Big Band. He played all over the United States, performed at the New Orleans Jazz Fest, on cruise ships, at many casinos, many clubs in the French Quarter and even a small tour in Portugal. He lost track of the count of bands but fondly remembered all his bandmates. Eric passed away March 5, 2017, as an active member of The Woodlands Concert Band, Lord of Life Lutheran Dance Band, Christ Church United Methodist Ensemble and the Jim Conner’s Group. WHAT A LIFE!!! Celebration Services will take place at 11:00 am on Saturday March 11th, 2017 at Christ Church United Methodist, 6363 Research Forest Drive, The Woodlands, TX 77381, with a reception to follow. A Celebration will also be held at 3:00pm on Friday March 17th, 2017 at Jerusalem Shrine Temple, 1940 Ormond Boulevard, Destrehan, LA 70047, with a reception to follow. Please make contributions to The Woodlands Concert Band and the Jerusalem Shrine Temple Band.

Eric Doyle Simmons was born January 18th, 1925 in Osyka, Mississippi. For 92 years, he was all about Family, Flying and Music. And if you met him and spoke with him for 5 minutes, you knew how passionately he &#8220;sold&#8221; his love of... View Obituary & Service Information

The family of Eric Doyle Simmons created this Life Tributes page to make it easy to share your memories.

Send flowers to the Simmons family.