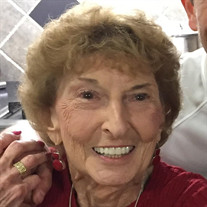 Ellen Kamensky McCoy passed on March 30, 2016 at her home in Waco, Texas at the age of 83. She left our world, surrounded by her family, with the same dignity and grace in which she lived. Visitation will be at St. Rose of Lima Catholic Church, 3600 Brinkman, Houston, Texas on Friday, April 1, from 6:00 p.m. to 8:00 p.m. with the rosary beginning at 7:00 p.m. Mass will be celebrated at St. Rose at 10:00 a.m. on Saturday, April 2 with the graveside service at 10:00 a.m. on Sunday, April 3 at Brookside Memorial Park, 13747 Eastex Freeway, Houston, Texas. Ellen loved gardening and you would typically find her outside lovingly coaxing things to grow. Azaleas were one of her favorites and, of course, anything and everything blue. Ellen's family was, and will continue to be, her top priority. The love she gave each one of us was constant and unconditional. She had the most wonderful way of making you feel better - most times without having to say a word. At the end, even though she was so weak, she found the strength, along with her sweet smile, to embrace each and every one of us. We, her family, have been forever blessed. Ellen's strong belief in her faith was evident in everything she did and everyone she touched. Even though those of us left behind are so sad and a little bit lost, we know God is happy to have his angel back. Ellen was predeceased by her parents, George and Elizabeth Kamensky, her brother, George Kamensky and nieces, Gloria McDade and Theresa Schultz, Mark Greeson and Gary Greeson. She is survived by her husband of 63 years, Henry; her sister, Barbara Jean Kubena; her daughters, Rosana Ketner, Maureen McCoy and Amy McCoy; nieces and nephews, Michael Kamensky, Vicki Kubena, Mark Kubena, Allen Kamensky, Karen Kubena, Billy Barreda, Priscilla Eyler, Angie Griffith, Robin Cole and David Wilson; grandchildren, Courtney Steinberg, Whitney Floyd, Kali Beal, Alexandra Wegs, Nicholas McCoy and Emily Wegs; and her great-grandchiildren, Hoyt Steinberg, Sutton Steinberg, Campbell Floyd and Tucker Steinberg. Friends are invited to visit with the family from 6 pm until 8 pm on Friday, April 1, 2016 at St. Rose of Lima Catholic Church, 3600 Brinkman, Houston, Texas 77018, where a 7 pm Rosary will be recited. A Funeral Mass will be celebrated at 10 am on Saturday, April 2, 2016 at St. Rose of Lima Catholic Church, with a reception to follow in the parish hall. A graveside service and interment will be held at 10 am on Sunday, April 3, 2016 in Brookside Memorial Park.

Ellen Kamensky McCoy passed on March 30, 2016 at her home in Waco, Texas at the age of 83. She left our world, surrounded by her family, with the same dignity and grace in which she lived. Visitation will be at St. Rose of Lima Catholic Church,... View Obituary & Service Information

The family of Ellen Kamensky McCoy created this Life Tributes page to make it easy to share your memories.

Send flowers to the McCoy family.