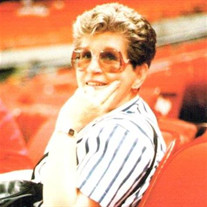 Betty St. Vigne Stubblefield, 90, passed into the arms of Our Lord Jesus Christ on Thursday, April 23rd, 2015. Betty was born on July 14, 1924 to Maude Bernice Ramsey St. Vigne and Joe St. Vigne in Ward, Arkansas. She spent her childhood growing up in Stonewall, LA. She often spoke of the trips to the spring to get water with her siblings and the simple pleasures of living on a farm. Betty graduated from Stonewall High School in 1941 and attended Business School in Shreveport where she studied business administration and business law and graduated in 1942. Betty met her husband, Howard Leslie Stubblefield, while working as a clerk for The Military Induction Center in Shreveport, Louisiana. They married and had four children. Betty moved to Conroe in 1972 and began working at the Sadler Clinic as a medical transcriptionist, working her way up to Associate Administrator. She remained there for over 12 years until her retirement in April of 1985. Betty then established The Montgomery County Medical Society and took on the role of Executive Director. She held that position for over 20 years until her retirement in 2006. Betty was well known and respected throughout the medical community in Montgomery County for her no nonsense attitude and her tenacity to get even the most difficult tasks accomplished. Betty loved sports and could tell you the names of players, coaches, stats and rankings from almost any team you could mention. She especially loved baseball and cherished the memories of being taken to the Astrodome to see the Astros play. Betty was preceded in death by her parents, her brother, Bobby Joe and her husband, Howard J. Stubblefield. She is survived by her brother, James “Jimmy” St. Vigne and wife Ann of Conroe, sisters; Jacqueline “Jack” Mann of Dallas and Juanita “Nita” Hudson of Shreveport. She is also survived by her children; Nancy St. Vigne Warren and husband Curt of Rogue River, Oregon, Juanita Thompson and husband Joe of Sumter, South Carolina, Alicia “Lissie” Stubblefield and friend John Sheppard of Oklahoma City, Oklahoma. She is also survived by her son, Mark Stubblefield and wife Harriet Rodgers Stubblefield of The Woodlands and two grandchildren; Stephen Stubblefield and Therese Stubblefield. Betty lived her life on her terms. Those that knew her, understood that when she set her mind to something, it was going to be done. It was her wish not to have a memorial service and we are going to respect that wish. Please make any contributions in Betty Stubblefield’s name to The Montgomery County Woman’s Shelter.

The family of Elizabeth "Betty" St. Vigne Stubblefield created this Life Tributes page to make it easy to share your memories.

Betty St. Vigne Stubblefield, 90, passed into the arms of Our...

Send flowers to the Stubblefield family.