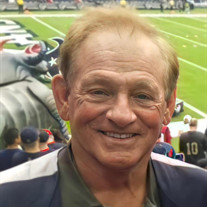 E. Nick Henery, a retired electrical engineer of Conroe, Texas, joined the immortally challenged on November 18, 2021, at the age of 79. Since he’s finally kicked his lifelong oxygen habit, he’ll catch a ride on the sin wagon in Fort Collins, Colorado at Grandview Cemetery, where he will go ahead to stake a claim on some prime real estate in the Elysian fields for the family he’s left behind. The loved ones who will someday join him at his eternal estate in the clouds are Neda Henery, his beautiful wife, and her children, Chase Whitehead and Lauren Rockett; Gabrielle N. Henery, his oldest daughter, and her wife Angela Bosco-Lauth; Giovanna L. Henery, his youngest daughter, and her husband, Dustin Tucker; and Paulette Wharton, his adopted daughter, who was pulled aboard the Henery train when she was 8. It doesn’t stop there; Nick also was a grandfather to eight grandkids: Adam and Kaelyn Ramirez, Grayson March, Masey, and Dallas Whitehead, and Tabitha, Summer, and Hailey Ray. Nick was born Edward Nick Henery to Lawrence “Dutch” Henery and Bonnie Henery. His father worked on road crews and because of this, Nick lived the first eight years of his life in a travel trailer. (We’re pretty sure this is why he chose to leave early and make sure his family had a nice place to settle when we all get to heaven.) As a child, he enjoyed hunting, fishing, and shooting at small woodland creatures. He graduated high school in Deep Water, Missouri where he alone brought the team to a state championship and would have gone pro if only he were a little taller. After being refused by the NBA to have the regulation height of the baskets lowered, he decided to find a new passion and went to college at the Missouri School of Mines, where he engineered a degree in 1976. (See what I did there… engineered… cause he’s an electrical engineer.) He served his country and achieved the rank of Army Captain in Vietnam by getting eaten alive by mosquitos, never complaining about constantly soggy feet, and helping his unit stave off C-ration burnout with his stealthy-woodland-creature hunting skills. He returned home with a couple of bronze stars in his pocket. Apparently, an engineering degree and dodging bullets in the jungle was not enough of a challenge; after Vietnam, he went back to school and picked himself up for a Master of Science in Quantitative Statistical Methods. Years later, when his oldest daughter was failing her statistics class in undergrad, he compassionately lied to her and said, “Sweetie, statistics were hard for me, too; if I can do it, you can do it.” He was exceptionally excited when his youngest followed in his nerdy footsteps by working toward a Ph.D. in Communication, Technology, and Data Analysis. For years he worked successfully for FERC, the APPA, and SMUD (not all at the same time). However, he was a true public servant, assuring every day that superstars had the appropriate backlighting, Joe Public always had a cold Coors Lite, and his daughters were able to help Mario save Princess Peach. He downplayed the work he did and told people, “I just keep the lights on.” In his free time, and then even more once he retired, he pumped iron at the gym, smacked a tiny, dimpled ball around a field, and aspired to become a master angler. During one of his fishing trips, he fell in the river, so for Father’s Day that year, he received a box of flies and a pair of little girls’ water wings. I’m pretty sure he wore them at his next fishing trip. The reaper challenged Nick to a card game that he couldn’t refuse. His loving family was there to cheer him on, but despite the Ph.D. in Survival he earned during his tour in Vietnam, he was dealt a bad hand and had to cash in his chips. Someday we will meet this kind-hearted warrior in a Valhallan paradise, but until that day, Nick (Dad), you will be missed.

E. Nick Henery, a retired electrical engineer of Conroe, Texas, joined the immortally challenged on November 18, 2021, at the age of 79. Since he&#8217;s finally kicked his lifelong oxygen habit, he&#8217;ll catch a ride on the sin wagon in... View Obituary & Service Information

The family of Edward "Nick" Henery created this Life Tributes page to make it easy to share your memories.

Send flowers to the Henery family.