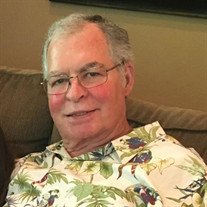 Earl Levi Love went to be with the Lord on Tuesday, September 28, 2021 in The Woodlands, Texas. Earl was born on March 17, 1951 in Roswell, New Mexico to Edgar and Fern Love. He was the second son of the two. His father was a Marine and safety officer for a power company in Amarillo and his mother stayed at home with the boys. Earl was an outdoorsman who shared that love with his sons and grandchildren. Earl had many talents and among them were painting, acting and fixing anything with a motor. He graduated from Tascosa High School in 1969. Earl enlisted in the Reserves instead of being drafted in 1969 at the age of 17 where he served as a heavy truck mechanic. He switched to active duty in 1971 and was honorably discharged in 1975. Earl graduated from Texas Tech University in 1977 with a degree in Business Administration. Earl met the love of his life, Lyn in September of 1975 and married on June 4, 1976. Together, they had two sons, Levi and Austin. Earl was a member of the Scottish Rite, Shriners and a Freemason following in his father’s footsteps. Earl spent many years traveling the world as an International Buyer for phone system components. He enjoyed learning about Far East cultures and was the third person allowed in China when they opened the country to Free Trade. Later in life, Earl found a passion in winemaking. He followed that dream by receiving a degree in Viticulture and Enology from Grayson County Community College in 2008. After he retired in 2009, Earl achieved his dream of being a winemaker and opened Texas Star Winery in Richards, Texas in 2010. Earl and Lyn quickly became fixtures in the small town. They helped run vacation bible school and summer programs for the children in Richards. In 2014, Earl and Lyn retired from the winery business and moved to Montgomery to be closer to their grandkids. Earl’s greatest joy was being a grandfather to his eight grandchildren. He loved to play with all of his grandkids. He could transition from playing tractors with the boys to a tea party with his granddaughters. He enjoyed cheering on his grandsons from the sidelines at games. Earl was preceded in death by his wife, Judy Lyn Love and his parents, Edgar Wray Love and Fern Silvis Love. He is survived by son, Levi Love and wife, Lacey of Conroe; Austin Love and wife Rebekah, of Conroe; grandchildren, Trey, Mason, Gwendolyn, Anna, Asher, Benjamin, Evelyn and Nathan; brother, Bruce Love and wife, Janet of Washington and many nieces and nephews. A Celebration of Life will be held at 3 PM on Sunday, October 3, 2021 at The Woodlands First Baptist Church North Campus, 5148 FM 1488, Magnolia, TX 77354.

Earl Levi Love went to be with the Lord on Tuesday, September 28, 2021 in The Woodlands, Texas. Earl was born on March 17, 1951 in Roswell, New Mexico to Edgar and Fern Love. He was the second son of the two. His father was a Marine and... View Obituary & Service Information

The family of Earl Levi Love created this Life Tributes page to make it easy to share your memories.

Earl Levi Love went to be with the Lord on Tuesday, September...

Send flowers to the Love family.