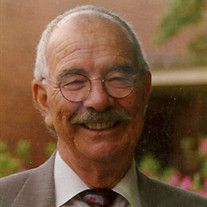 Donald Berry Hunter died October 11, 2010 in Conroe, Texas. Dr. Hunter was born August 2, 1928 in Union, Mississippi. He leaves his wife of 10 years, Judie Hunter; daughter Leslie and husband, Billy Davis; two grandsons, Lindsey Hunter and Drew Johnson; step-sons, Drew, Kris, and Clay Lowe; and nephews Eric and Mike Hunter. He was preceded in death by his son, Donald B. Hunter, Jr. (Donnie); father and mother, Orion and Blanche Hunter; brother, Gaston Hunter; and granddaughter, Julie Latimer.Dr. Hunter most recently retired several years ago from Conroe ISD where he served as Superintendent of Special Projects for 7 years. He graduated from Mississippi Southern University with his BS and Master's degree in mathematics. He served as a captain in the U.S. Army during the Korean conflict in artillery and reconnaissance. Upon his return, he went to the University of Indiana and completed his Doctorate in Education.His professional career led him first as a high school math teacher and coach of football in Mississippi. After graduating from Indiana, he went to Murray State University in Kentucky as a grant writer and Dean of Education for 28 years.He was appointed Superintendent of Public Instruction under Kentucky Governor John Brown in Frankfort for 4 years. He later became Superintendent of Covington ISD in Kentucky for 8 years retiring to Florida. Dr. Hunter continued as a consultant in education and then came to Conroe in 1992. His vision completed building the Challenge-Ropes Course for experiential learning at Conroe High School and a specific program for pregnant teens.Dr. Hunter loved Texas and joined the CutnShoot Harley Owners group. He also living living on Lake Conroe boating with friends and family.Every summer he enjoyed the mountains of New Mexico. He taught Sunday school at Magnolia United Methodist Church in past years and was strong in his faith, sharing his love and generosity with many close to him. His former students from Kentucky called him the "force" with his constant mentorship and encouragement.He will be missed by everyone who knew him because of his strength and guidance for all those he loved. A celebration service will be held at 10:00 a.m. on Friday, October 15, 2010 at Harbour Town in Seven Coves on Lake Conroe.In lieu of flowers, please donate to either Texas New Community - New Danville, P.O. Box 7181, The Woodlands, TX 77387-7181 or CutnShoot Charities, c/o Texan Harley Davidson, 2111 N. Frazier, Conroe, TX 77301. Please designate the gift for the Don Hunter Memorial.

The family of Donald Berry Hunter created this Life Tributes page to make it easy to share your memories.

Send flowers to the Hunter family.