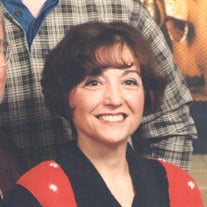 Diane B. Hurley passed away on November 20th after fighting vigorously an aggressive brain cancer. She was a loving wife, mother, grandmother, sister and aunt. All who knew her were grateful for sharing her life and love. Diane was born on July 22nd, 1947 to parents Connie and Jack Burgess on Staten Island, New York. She had two younger brothers John and Michael and numerous aunts, uncles and cousins, as her mother was the oldest of six children in the Montella family. This large extended family, including her loved grandparents, Gennaro and Carmela Montella, was the main focus of her life during her formative years. She attended Saint Peters High School for Girls on Staten Island, graduating in 1966. In her junior year, she met her future husband, Joe who was a senior at the companion Saint Peters High School for Boys. This happy meeting led to four years of dating, engagement and then marriage, which celebrated its 50th anniversary November 9th of this year. Unsure of her immediate academic future, Diane decided to broaden her experience with travel and was accepted by United Airlines for stewardess training. She enjoyed the career, though short-lived because upon her marriage to Joe in 1968, she had to resign her position. In that time, she had decided to pursue a career in nursing. That interest led her to graduating with an R.N. degree from Staten Island Community College, largely done while her new husband was fulfilling his military commitment with the U.S. Navy (1969 - 1971). In the future years of her R.N. career (47 years), Diane would complete her Bachelor’s and a Master’s degree in Public Health. Her education, love and support allowed her husband, after returning from deployment in Vietnam, to continue his education which culminated in a Ph.D. and teaching Computer Science at multiple universities, the last 24 years being at Texas A&M until 2017. During her long health career, Diane earned great experience in fulfilling the responsibilities of the many positions she held. The three most recent illustrate her leadership skills and the respect her performance earned her. She was a Chief Nursing Officer for the majority of a decade for Seven Acres Assisted Living facility, serving 300 residents plus 100 daycare participants. A Meyerland facility, her days were most often a 5 a.m. rise to 6:30 p.m. arrival home. She loved the residents more than the grind. Her next position, Director of Risk Management at Kingwood Hospital, required interacting with legal issues and law firms ensuring the hospitals responsibility to provide effective and safe health policies for the care of patients. Her final position was the Director of the accredited Joe Davis LVN School of Nursing in Huntsville. This position focused on the teaching and training of students pursing such a career, with some continuing further to become registered nurses. She was able to utilize her wide experience to assist students in their education. Many former students expressed their gratitude for all Diane shared with them. Diane is survived by her grateful husband, Dr. Joseph D. Hurley, Sr.; loving son, Joseph D. Hurley, Jr.; daughter-in-law, Susan Hurley; and her loved and adored 9-year-old granddaughter, Sara Kathryn. Extended family members all mourn the loss and share their love for her. A Mass will be celebrated at 2 pm on Tuesday, November 27, 2018 at Sacred Heart Catholic Church, 109 N. Frazier St. Conroe, TX 77301. In lieu of flowers, donations to the American Cancer Society or other charity would be respected.

Diane B. Hurley passed away on November 20th after fighting vigorously an aggressive brain cancer. She was a loving wife, mother, grandmother, sister and aunt. All who knew her were grateful for sharing her life and love. Diane was born... View Obituary & Service Information

The family of Diane B. Hurley created this Life Tributes page to make it easy to share your memories.

Diane B. Hurley passed away on November 20th after fighting vigorously...

Send flowers to the Hurley family.