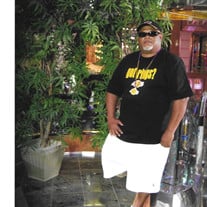 Derek Vincent Ross (Dee) was born on April 1, 1962. His parents were Ernest and Myrtle Rebecca Ross who had ten children. The youngest were the twins, Deborah and Derek. Derek shared a close bond with his twin sister Deborah Ross (Guidry). Derek spent his early childhood years in Chicago, IL. At a young age, the family moved to Monrovia, CA, where he began to make many friends and create special bonds that lasted over 50 years. Derek attended Monrovia High School for the majority of his high school years, where they called themselves “The 80s Boys and Girls”, then finished his senior year at West Covina High, Class of 1980. He then went on to attend college at Citrus College, where he took courses in alcohol and drug counseling. Derek started his own business called Attention to Detail: commercial floor cleaning. Later, he was employed by Harris County Toll Road for a few years. He then transitioned to become a Laser Machinist working on different machines which he enjoyed immensely. There are Laker fans and then there are “DIE HARD LAKER FANS” in which Dee undoubtedly was!! He enjoyed watching the games with family, friends, and strangers even when he was on vacation. Dee was loved by many and a friend to all. He was quick to make friends wherever he went. Dee also loved to cook with his family and friends especially during the holidays and special events where all were welcomed to have fun and socialize. Derek’s greatest love was Lisa Rivers. On June 14, 2018, Derek planned and surprised Lisa with the perfect intimate wedding that will forever be marked as a beautiful momentous occasion. During their time together, Derek and Lisa enjoyed traveling in and out of the country, site seeing, as well as visiting historical landmarks. Their next adventure would have been Yosemite National Park and Alaska. Dee was a very adventurous person at heart. He even stated that traveling and exploring the great outdoors was his heaven on earth. Derek accepted Christ early in life. Before his passing, Derek rededicated his life to Christ at New Covenant Fellowship Church under Pastor Rickey Guidry. Dee will be remembered for his laughter, wittiness, and iconic entertaining stories. He had a welcoming smile and willingness to come at any time whether it be night or day to help a neighbor or friend in need. Derek Vincent Ross (Dee) suddenly fell ill from COVID-19 complications. He fought a hard, long fight, but Christ decided to gain another soldier on August 27, 2021, at 8:15 pm. Derek was 59 years old. He will be greatly missed. Derek was preceded in death by both his parents Ernest Ross (Father) and Myrtle Rebecca Ross (Mother), Sisters: Paulette Jackson, Linda Williams, Janice Ross; Brother Ricardo R. Ross. Derek leaves to mourn his wife, Lisa Rivers Ross; daughters, Camille Ross, Marquia Hicks; sons, Lloyd Stapleton, Amon Webster and son-in-law Trey Hicks. Derek leaves to cherish his precious memories of four grandchildren, Zori Stapleton, Zara Stapleton, Taylor Hicks and Jalen Hicks. Sister, Deborah Guidry (Rickey Guidry), brothers, Ronnie Streeter, Ernie Ross (Christina Ross), Eric Tubby Ross (Tainya Ross), Harold Lawrence (Yolanda Lawrence), Charles Streeter; mother-in-law, Margaret Rushing; sisters-in-law, Paulette Gray (Leon Gray) Lori Lessard (Jamie Lessard); Aunt Minnie Morton with nephews, nieces, and family members both near and far. Friends are invited to visit with the family from 1:30 PM to 2 PM with a celebration of life to follow at 2 PM on Friday, September 17, 2021 at Eickenhorst Funeral Service, 1712 N Frazier St #115, Conroe, TX 77301. To view the livestream: https://youtu.be/EIaeduLO2Cc

Derek Vincent Ross (Dee) was born on April 1, 1962. His parents were Ernest and Myrtle Rebecca Ross who had ten children. The youngest were the twins, Deborah and Derek. Derek shared a close bond with his twin sister Deborah Ross (Guidry). Derek... View Obituary & Service Information

The family of Derek Vincent Ross created this Life Tributes page to make it easy to share your memories.

Send flowers to the Ross family.