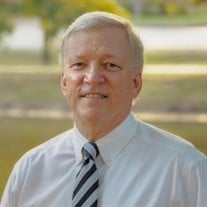 David Brian Yost of The Woodlands, Texas, passed away unexpectedly on Thursday, June 3, 2021. David, the third of four brothers, was born on January 30, 1964, in New Lebanon, Ohio. He was proud of his rural upbringing on Main Street where his close-knit family was very active both in their community and their church home, Church of the Brethren. Growing up, David was very involved in his church youth group and summer youth camps. He also enjoyed sports. He started both wrestling and baseball at a young age and continued competing throughout high school. David graduated from Dixie High School in 1982. He earned his Bachelor of Science degree in civil engineering from the University of Cincinnati and a master’s degree in civil engineering from Purdue University. Following his graduation from Purdue, David accepted a job with Exxon in Houston, Texas, the company he stayed with for 32 years. It was in Texas where he met Karen, his wife of 26 years. They married on June 10, 1995, and had many exciting adventures together. David and his family enjoyed traveling throughout the country, visiting their many family members, as well as discovering things to do in Texas. His work at ExxonMobil encompassed many areas, but he most enjoyed project work that took him on long-term assignments to Stavanger, Norway, for Ringhorne; and Brisbane, Australia, for the Papua New Guinea LNG Project. Most recently, he finished the Liza Phase 1 project in Guyana, and then moved to his final role as a Senior Principal Engineer supporting ExxonMobil’s global portfolio of projects and operations. David was very devoted to his family. He and Karen have two beautiful children. Daughter Kaitlyn will be a sophomore at SMU next year, and son Jonathan will be a junior at The Woodlands High School. David was a strong supporter of both his children, enthusiastically involved in all their endeavors. Whether it was sports, music, Boy Scouts, or AFJROTC, David was always their biggest fan. David had a quick wit, and could always bring a smile to someone’s face. He truly cared about the people around him, and had a natural ability to make them feel at ease. He was a bible study teacher for the Encouragers at The Woodlands First Baptist Church, and was always willing to help if there was a need. At family gatherings, he was the one on the floor, playing cars with the toddlers, or in the backyard, pushing them on swings and playing ball with the older kids. He would spend hours talking with his aunts, uncles, and cousins, and he always had his arms open to hold the babies. David will be remembered as a loving husband, father, brother, cousin, and uncle, as well as a valued friend. While he left us too soon, he leaves behind a strong legacy that lives on in the lives he touched. David is survived by his wife, Karen (Johnson) Yost; daughter, Kaitlyn and son, Jonathan of The Woodlands, TX; brothers, Tim (Nancy) Yost of Malabar, Florida, and Jim (Beth) Yost of West Chester, Ohio; brother-in-law, Ray Johnson of Phoenix, Arizona; sister-in-law, Cheryl (Jon) Stout of Millsboro, Delaware; and numerous cousins, nieces, and nephews. David was preceded in death by his father, Francis; his mother, Barbara (Weimer); and his older brother, Stephen Yost. A memorial service celebrating David’s life will be held at The Woodlands First Baptist Church, on June 25, 2021 at 10:00 am. All are welcome. In lieu of flowers please make contributions to the Woodlands First Baptist Church or the David and Karen Yost Scholarship Endowment Fund (S200756) at the University of Cincinnati through https://giveto.uc.edu/give .

David Brian Yost of The Woodlands, Texas, passed away unexpectedly on Thursday, June 3, 2021. David, the third of four brothers, was born on January 30, 1964, in New Lebanon, Ohio. He was proud of his rural upbringing on Main Street where... View Obituary & Service Information

The family of David Brian Yost created this Life Tributes page to make it easy to share your memories.

David Brian Yost of The Woodlands, Texas, passed away unexpectedly...

Send flowers to the Yost family.