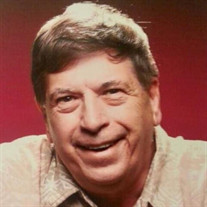 David Rees Hinkin Sr., 73, of Spring, Texas passed away suddenly at his home in the early morning hours of Monday, May 2, 2022. He was born in Greenville, PA on February 26, 1949, to the late William “Bill” and Jeanne Hinkin. At an early age, David discovered his first love, magic. That was until he met his true love, Sue. Both of which he dedicated 50+ years to. Whether bringing smiles to countless faces through his plethora of magic tricks or performing in local Community Theatre, the stage was one of the places he felt at home. Growing up in Greenville, PA he was involved in the Boy Scouts of America and earned the rank of Eagle Scout. He graduated from Greenville High School in 1968 and attended Youngstown State University. It was working at the local movie theater that he met his bride, Sue. They were married on October 14, 1972, and were inseparable ever since. They lived in Meadville, PA where they raised their family while he worked for the McDonald’s Corporation. He was a huge part of his kid’s life growing up, never missing a hockey game or a dance recital. If it was something that involved his kids, he was there, front row, center seat. In 2001 Sue and Dave relocated to Texas for his “dream job” where he continued to entertain until he retired, only to start his own business “The Magic Of David”. He was an avid member of several professional organizations; The International Brotherhood of Magicians, The Society of American Magicians, Texas Association of Magicians, and Houston Association of Magicians where he served in various roles and was honored with a few awards and accolades along the way. David wore many hats; loving husband, amazing dad, and friend to everyone he met but the title he was most proud of was “Pappy” to his two grandsons. David is survived by: his wife of 50 years, Susan (Gibbons) Hinkin; his son, David Hinkin Jr; his daughter, Amy (Hinkin) Córdova, and her husband, Walter, and two grandsons, Lucas and Gabriel. (At this time only, private services are being held.) At the family’s request, in lieu of flowers, donations can be made in his memory to the Ronald McDonald House Charities. https://support.rmhc.org/site/Donation2?idb=1308075195&DONATION_LEVEL_ID_SELECTED=1078&df_id=1820&1820.donation=form1&mfc_pref=T&idb=0

The family of David Rees Hinkin Sr. created this Life Tributes page to make it easy to share your memories.

Send flowers to the Hinkin family.