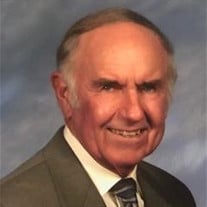 Creighton David (Dave) Coyne, 87, passed from this earth on October 25, 2019 at Houston’s St. Luke’s after a long struggle with cancer. He was born in Cushing, Oklahoma on July 2, 1932 to Emmett and Marjorie Coyne. He spent his youth in Cushing, where he was active in Boy Scouts and all sports including football, basketball and baseball. He enjoyed his years in school and told everyone stories about Cushing. Dave graduated from high school in 1950 and spent one year at Central State College in Edmond, Oklahoma and Oklahoma A&M (now Oklahoma State University) from 1951 through 1955 majoring in Mechanical Design which included Architectural and Drawing Design and receiving an Associate Degree in Engineering Technology. On July 1, 1955, Dave entered the U. S. Army which included a tour in Germany during the Cold War. He received a Good Conduct Medal, had experience as a supply specialist and completed construction projects as needed. After his discharge, he met and married Marilyn Aldrich, his wife of over 60 years. They had two children, Caren Elyse Coyne Powell and John Creighton Coyne. The greatest joy of his life were his children and grandchildren and they all loved him very much and learned so much from him about life and how to fix almost anything. During his construction career, he built residential homes, commercial buildings and highways, liking to claim he had built everything except an igloo. His building skill was also demonstrated by his favorite hobby of woodworking, and he completed many projects for family and friends---his last being a table for 12 for enjoying family gatherings. Being a long time resident of Conroe, he was active member of the First Christian Church and enjoyed attending cultural events such as the Conroe Symphony Orchestra and local theater productions. He was a life-time member of the Montgomery County Fair Association and the Bullcookers Barbeque Team for 42 years. He is survived by his wife, Marilyn; daughter, Caren Coyne Powell; son, John Creighton (Creig) Coyne and wife, Kristin; grandchildren, K. C. Powell, Payton Powell, Austin Coyne, Forrest Powell and Creighton Coyne; and his sister, Suzanne Coyne of Stillwater, Oklahoma. Many cousins and close friends survive him whom he loved very much. Graveside services and burial will be held at 11:30 a.m. on Friday, November 1, 2019 at Houston National Cemetery, 10410 Veterans Memorial Drive, Houston, Texas. Friends are invited to begin visiting at 10 a.m. on Saturday, November 2, 2019 at the First Christian Church of Conroe, 3500 N. Loop 336 W., Conroe, Texas 77304, where a Celebration of Life will begin at 11:00 with the Reverend Wayne Ivey officiating. Serving as pallbearers will be K. C. Powell, Austin Coyne, Forrest Powell, Creighton Coyne, Chuck Bergfield, and Don LaBarge. Honorary pallbearers are Bill Dark, John Grafton, Larry Klotz and Wayland Hutcheson. In lieu of flowers, those who desire may make donations honoring him to the First Christian Church of Conroe or Conroe Symphony Orchestra. .

The family of Creighton David "Dave" Coyne created this Life Tributes page to make it easy to share your memories.

Creighton David (Dave) Coyne, 87, passed from this earth on October...

Send flowers to the Coyne family.