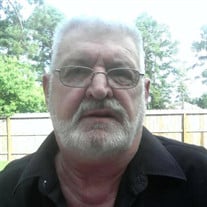 Clifford E Thompson, age 75 passed away on December 30, 2017. He was born on July 25, 1942 in Longview, Texas and graduated from Delhi High School in Delhi, Louisiana before enlisting in the USAF from 1960 until 1971. While stationed in Alaska, he saw the ground open and close in front of him during the 1964 Great Alaska Earthquake. He watched two lane highways become four lane interstates, towns grow and die. He was an owner-operator driving 48-wide plus Canada for 40 years. His outstanding accomplishment was driving over two million safe miles. He gave a dear friend the confidence to start her own business. He loved to travel and see historical sites like driving the Natchez Trace, seeing White Cloud, the iconic albino bison in Jamestown, ND, Vicksburg National Military Park, Custard’s Last Stand, and gunfight at the O.K. Coral in Tombstone, AZ. He was in every state except for Hawaii. While traveling, he loved to gamble and visited a lot of the country's casinos from Las Vegas, black jack rooms, the casino boats to the Indian casinos. His favorite casino game was 3-card poker. He also was an avid reader of Westerns and enjoyed such authors as Louis L’Amour, Ralph Compton and William W Johnstone. The vehicle radio or television were always on when the Texas Rangers, Dallas Cowboys and LSU Tigers were playing. Meeting friends and reading his newspaper at the donut shop in Old Town Spring brought much pleasure in his retirement years. He was preceded in death by his parents, Harry and Dorothy Thompson. He is survived by his daughter, Nancy Thompson of Spring, Texas, with whom he made his home after retirement. Survivors also include his brother, Richard B. Thompson of Sherman, Texas; nephew, Richard M. Thompson and family of Sherman; niece, Rhonda Thompson and family of Vallejo, CA; and cousin, Randy Saunders and family of Georgetown, SC; and step-granddaughter, Christen of Oregon.

Clifford E Thompson, age 75 passed away on December 30, 2017. He was born on July 25, 1942 in Longview, Texas and graduated from Delhi High School in Delhi, Louisiana before enlisting in the USAF from 1960 until 1971. While stationed in Alaska,... View Obituary & Service Information

The family of Clifford E Thompson created this Life Tributes page to make it easy to share your memories.

Send flowers to the Thompson family.