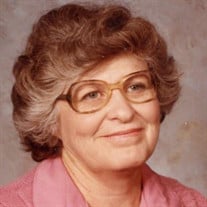 Clara Lois McDonald Masterson was born in Ash Community, near Austonio, in Houston County, Texas. She passed away on August 4, 2020, in Conroe, Texas. She grew up in Ash with her parents, Jepp and Nannie Lou (Lula) Cheairs McDonald, her two brothers, Leon and Wallace, and her two cousins, Billy and Earl. Clara graduated from the Austonio School in 1944. She loved to share the memories of playing volleyball, riding the bus to games, and walking across the cotton fields to school and back. Not only that but she also had fond memories of the "get-togethers" around the neighborhood on weekends when families would gather to play music, sing, and eat. After spending some time working in Houston, she met Bob (Rudolph) Masterson and their lives and futures became forever entwined. They married in 1948, settled in Conroe, and created their home on land settled by Bob's grandparents near the Youens community. Soon the children were born: Barbara, Karen, Robert, Billy, and Marcus. By 1961, their house was full and their lives were busy. Clara became a full-time housekeeper, cook, seamstress, gardener, naturalist, wife, and mother. Above all, she and Bob made certain that their children were educated and that they were shown the value of a Christian life. Clara enjoyed and embraced membership at Mims Baptist Church and then at First Baptist Church of Groceville in Cut 'N Shoot, where she was a faithful member for over sixty years. As her children grew up and began their own life journeys, Clara too began to pursue interests that had been dormant while she raised her children: painting, needlework, travel, and nature. Of the thrills of her life, being a member of both the Conroe Art League and the Cut 'N Shoot Art League, lit up her life for years. She filled her home with paintings of birds, seascapes, mountains, wildlife, and portraits. Traveling to Colorado with Bob brought her closer to nature and she was able to share Bob's love of the outdoors in the most beautiful place on earth: the Blanco River Basin. From those trips came paintings of elk, bear, mountains, and Old Bob's Cabin. Alas, they would grow older, and Bob passed in 2013. The past seven years have been a slow path through an unsettled life, but the good times have been noteworthy: days when she could celebrate family visits with her children and cousins, and days when the great-grands came to play in the yard surrounded by blooming azaleas and camellias on sunny spring days. When Clara could no longer stay at home, she moved to a place of safety and care where her caregivers comforted and protected her. The entire family appreciates and treasures the efforts of the staff and owners at Village Green, Conroe. Now, she too has passed. She leaves behind her children, grandchildren, great-grandchildren, relatives, and friends to mourn her memory. Children and families Barbara Karen (Lloyd Nichols), Daughter: Lauren Nichols Gottlieb, Grandchildren: Zane, Abigail, Eliana Robert (Debby), Children: Jana (grandchildren: Camryn Ward, Gage Smith), Jeffrey, Hayley (granddaughter: Charlotte), and Wesley Billy (Paula) Marcus (Janet), Son: Gregory (Jennifer) At the end of her days, we look back on Clara's life with appreciation and wonder at what she accomplished with her strong will, intelligence, compassion, and determination. May she rest in peace forever in the arms of her precious Lord. A Celebration of Clara's life will be held at a later time.

Clara Lois McDonald Masterson was born in Ash Community, near Austonio, in Houston County, Texas. She passed away on August 4, 2020, in Conroe, Texas. She grew up in Ash with her parents, Jepp and Nannie Lou (Lula) Cheairs McDonald, her two... View Obituary & Service Information

The family of Clara Lois McDonald Masterson created this Life Tributes page to make it easy to share your memories.

Clara Lois McDonald Masterson was born in Ash Community, near...

Send flowers to the Masterson family.