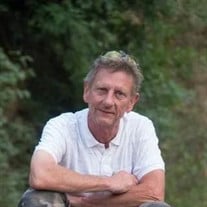 Charles “Chuck” Blair of Magnolia, Texas, passed away unexpectedly at the North Cypress Medical Center in Cypress, Texas on April 19, 2016. In his short 61 years of life, Chuck lived every moment to the fullest. He was blessed with such a generous, compassionate spirit that allowed everyone he encountered throughout his life to be able to part ways as new friends. He never met a stranger. Chuck’s love of adventure and positive outlook on life afforded him so very many life experiences. He lived each and every day with absolutely no regrets. Chuck was born in South Bend, Indiana to John W. and Margaret I. Blair, both of whom preceded him in death. He graduated from John Adams High School in South Bend and then joined the US Army. He served in the 1st Platoon Alpha Company 75th Rangers. He was honorably discharged in 1978. He then relocated to the Houston area where he met the love of his life, Tawnya Hemminger. They were married on September 10, 1982 and spent the rest of their time together forming a lifelong loving partnership and family, and experiencing all that life had to offer without ever needing to look back. As a child, he developed a passion for tinkering while working alongside his brothers and father. Those skills aided him later in life. Chuck used those skills and passion to build a successful business, Benz by Blair, which became the top shop in the industry. After selling that business, Chuck’s entrepreneurial talents brought him to the development of his final company, Affordable American, Inc. which remains a family-run business today. Although Chuck received his mechanical skills from his father, his compassion, tolerance, and deep love of family were qualities that he shared with his mother. Chuck was an extraordinary husband, loving father, brother and a friend. All who met him on his journey have been forever touch by his quiet grace. Chuck is survived by his wife of 34 years, Tawnya and two children: Justin and Oriana Blair, all of Magnolia, Texas; two grandchildren: Mikale Blair and Roselynn Blair; three siblings: a sister, Connie Blair of Magnolia, John (Sandy) Blair of Rotonda West, FL, and David (Karen) Blair of Spring, Texas; two brothers-in-law, Paul (Lisa) Hemminger of Rio Rancho, NM, and Joshua Maestas of Albuquerque, NM; two sisters-in-law, Tammy (Ronnie) Davenport of Jones, OK, and Toni (Scott) Thompson of Rio Rancho, NM; one uncle, Cecil Smith of Greencastle, IN; fifteen nieces and nephews: Kelly, Megan, Steph, Carly, Katie, Ciara, Brandon, Joshlyn, David, Elizabeth, Emma, Grace, Ethan, Nadia, and Bohde. Another brother-in-law, Livie Maestas, preceded him in death. In lieu of flowers, memorial contributions may be made to David Skinner, a missionary to Mexico, Montana and the world, through PayPal at NBT.org.

Charles &#8220;Chuck&#8221; Blair of Magnolia, Texas, passed away unexpectedly at the North Cypress Medical Center in Cypress, Texas on April 19, 2016. In his short 61 years of life, Chuck lived every moment to the fullest. He was blessed with... View Obituary & Service Information

The family of Charles Patrick Blair created this Life Tributes page to make it easy to share your memories.

Send flowers to the Blair family.