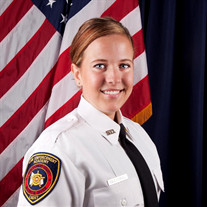 Catherine Denee Breeding, Deputy Sheriff for the Montgomery County Sheriff’s Office and resident of Shenandoah, Texas, was born on August 12, 1993 in Conroe, TX and departed this life on January 29, 2015 in Conroe, TX at the age of 21. She is deeply missed by family and friends. Catherine graduated Cum Laude from Providence Classical Christian School in 2011. As a youth she competed in swimming and triathlons. She attended and served on several mission trips with The Crossing Church and also attended The Ark Family Church. During most of her high school years, she performed in many CYT productions from chorus singer/dancer to leading roles. Catherine was always eager to volunteer for local causes such as Dragon Boat Races, Run in The Woods and the MS 150 Bike Ride to name just a few. During her high school and early college years, Catherine was employed by Chick-fil-a in The Woodlands. She met numerous law enforcement officers there and was intrigued by the opportunity and was encouraged to apply to the academy. Even though she rose to the position of Assistant Manager at Chick-fil-a, she realized that she had found her calling. After graduating second in her class from the Montgomery County Sheriff’s Police Academy in October 2014, Catherine began fulfilling her dream and passion to become a law enforcement officer. She was also a member of CLEAT (Combined Law Enforcement Associations of Texas). She is so beloved and was a blessing in the truest sense of the word. She is survived by her loving parents, Steve and Barbara Breeding; brothers, Matthew and Christopher Breeding; grandparents, Jim and Jo Ann Breeding of Hot Springs Village, Arkansas, Lucille Landry of The Bronx, NY and Robert Landry of Springhill, FL; uncles and aunts, Bruce and Lucille Cudmore, Chris and Maria Tassa, Joel Breeding, Ellen Fouts and Barbara Abadie; cousins, Bruce and Kelly Cudmore, Bob Cudmore, Fred and Rosie Beaubien, Benjamin Cudmore, Amanda, Cherrie, and Sarah Jo Abadie, Gabriella, Christopher, Anthony and Andrea Tassa. Friends are invited to visit with the family from 6 pm until 9 pm on Monday, February 2, 2015 at The Crossing Church, 6265 Shadowbend Place, The Woodlands, TX 77381. A funeral Service will be held at 11 am on Tuesday, February 3, 2015 at The Woodlands United Methodist Church, 2200 Lake Woodlands Drive, The Woodlands, TX 77380. Burial will follow in Forest Park The Woodlands Cemetery. Those wishing to post tributes and memories to the family may do so at www.eickenhorstfuneral.com. Services entrusted to Eickenhorst Funeral Services.

Catherine Denee Breeding, Deputy Sheriff for the Montgomery County Sheriff&#8217;s Office and resident of Shenandoah, Texas, was born on August 12, 1993 in Conroe, TX and departed this life on January 29, 2015 in Conroe, TX at the age of 21. She... View Obituary & Service Information

The family of Catherine Breeding created this Life Tributes page to make it easy to share your memories.

Send flowers to the Breeding family.