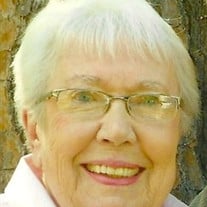 Catharine (Cathy) Ober, born November 19, 1930 in Greensburg, Pennsylvania, went to live with God unexpectedly on January 8, 2012. She enjoyed a very happy and loving childhood shaped by her parents, aunt and uncle and maternal grandmother with three doting older siblings and a younger brother and sister. Cathy spent summers at the Girl Scout camp directed by her aunt and older sister. Following graduation from high school, Cathy followed her mother's footsteps and attended Lockhaven State Teachers College where she earned a bachelor's degree in Early Childhood Education. She married Merle Ober after graduation, the first of the close-knit Pi Kappa Sigma couples to wed....59 years ago. The girls began a Round Robin circulating letter exchange to keep in touch that continued throughout her life. Cathy taught kindergarten in Greensburg for a year and then devoted herself to full time motherhood for the next 23 years, serving on PTA boards and as a dedicated swim team mom while the family lived in Pennsylvania, Oregon, Arkansas, Kentucky, and Texas. She then went back to teaching and, as once was said of her, "she showed her students that 'loving to learn' and 'learning to love' are inseparable in this world." Cathy taught kindergarten at St. James Episcopal Day School for nineteen years. She was an accomplished golfer and loved the sport, winning several tournaments and making a "hole-in-one" at their country club while living in Arkansas. The couple also loved time spent with close friends at Greers Ferry Lake in Arkansas. In recent years, Cathy and Merle have enjoyed the exercise and fellowship of the Silver Sneakers program at the Conroe YMCA. They are members at St. Paul United Methodist Church and truly love their church family.Cathy was preceded in death by her parents, Sarah Rowena and Oliver Louis McClain, a loving aunt and uncle, Katherine and Harvey Boarts, brothers, James, Neil and Louis, and a sister, Grace. She is survived by her devoted husband, Merle George Ober and constant canine companion, Lady. Also surviving are daughters, Christine (Robert) Bridwell of Conway, Arkansas, and Kim (John) Ross of Conroe. Grandchildren are Ashley (Nathan) Pyle of Conway, Arkansas, Matthew (Brandi) Bridwell of Little Rock, Arkansas, Sarah Ross of San Antonio, Texas, Samuel Ross of Denton, Texas, and Hannah Ross of Conroe. Great granddaughters are Lauren and Emma Pyle of Conway, Arkansas. Cathy is also survived by her sister, Mary Jo Davidson of Bushkill, Pennsylvania.In lieu of flowers, memorial gifts to St. Paul United Methodist Church of Conroe (P.O. Box 506, Conroe, TX 77305) or the Conroe Animal Shelter (407 Sgt. Ed Holcomb Blvd., Conroe, TX 77304) would be appreciated. Family and friends are invited to share in a celebration of Cathy's life on Saturday, January 14, 2012 at 3 pm at St. Paul United Methodist Church, 1100 W. Semands Avenue in Conroe with The Rev Cynthia Hinson officiating. Those wishing to leave a written tribute and share your memories of Cathy may do so at www.eickenhorstfuneral.com.

Catharine (Cathy) Ober, born November 19, 1930 in Greensburg, Pennsylvania, went to live with God unexpectedly on January 8, 2012. She enjoyed a very happy and loving childhood shaped by her parents, aunt and uncle and maternal grandmother with... View Obituary & Service Information

The family of Catharine Ray Ober created this Life Tributes page to make it easy to share your memories.

Send flowers to the Ober family.