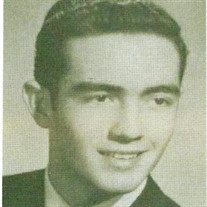 Carl K Creekmore, Jr. died Saturday, November 14, 2020, in Memorial Herman Hospital, The Woodlands, Texas after a brief illness. He was born January 10, 1941, in Van Buren, Arkansas, to Carl K Creekmore, Sr. and Crystal Viola Rogers Creekmore. Carl graduated from the University of Arkansas and The University of Arkansas School of Law. He was a member of Phi Delta Theta fraternity. He was in the U.S. Army stationed in Germany. Prior to his retirement, he was Director of Public Facilities and had a private law practice in Van Buren, Arkansas. Carl is survived by his life partner, Eleanor Clark, The Woodlands, Texas; brother Ken (Tracey), Huntsville, Alabama; sister Donna Harriman, Fayetteville, Arkansas; nephews John Harriman, Little Rock, Arkansas, and Brian Harriman, Portland, Oregon. He also loved his role as being grandfather to Nicholas, Andrew, and Rachel Carlson, the children of Eleanor's daughter, Melissa Carlson (Tom), The Woodlands, Texas. Carl was a kind and loving person with a great sense of humor and intellect. He was an expert crappie fisherman who loved nothing more than fishing with his brother, Ken, at Lake Fork, Texas. He loved his family, children, animals, gardening, and working crosswords. There will be no services and his wish is to have his ashes scattered at Lake Fork. Memorials to any animal shelters would make him smile.

The family of Carl K. Creekmore, Jr. created this Life Tributes page to make it easy to share your memories.

Send flowers to the Creekmore, family.