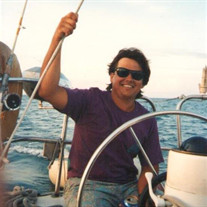 Captain Kevin Dale Venell, 54, of Kemah, Texas passed away on Sunday, May 10th, 2015 at his home in San Leon, Texas. Kevin was born on March 27, 1961 in Wichita, Kansas to Terry Venell & Carolyn Park. Kevin lived with his mother and sister as a child and chose to move to Kemah, Texas to live with his father when he was 12. He loved the sea and he enjoyed living on the bay. Kevin graduated from Clear Creek High School in 1979 and completed courses at San Jacinto College. Kevin discovered his passion for skydiving at age 16. The drop zone became his hang out and his passion. He quickly became the hometown hero with his classmates when he jumped into the homecoming football game in 1978. Kevin loved skydiving and that soon lead to another passion in his life: B.A.S.E. jumping. He acquired his BASE #58 in 1983 followed by his Night BASE number in 1984. Kevin was known for some ground breaking BASE jumps such as his jump from a moving train going over the Pecos River Bridge in west Texas as well as a jump inside the Houston Astrodome at the beginning of an Astros baseball game and when he proposed to his future wife. During the 80's, Kevin and friends also jumped several buildings in Houston and Dallas including the Transco Tower in Houston. In the late 80’s he discovered a new passion, sailing and pursued racing and recreational sailing for most of his adult life. After rediscovering his passion for the sea he acquired his U.S. Coast Guard certified Master License and was certified to a operate 200 ton vessel as the captain. He was married in 1994 and his son, Evan was born in 1997. He was divorced in 2004. Kevin found his permanent profession during this time as a US Coast Guard certified 200 ton master. He was loved by many and never met a stranger. Kevin had a magnetic personality and his wit was one of kind. He was a member of many professional organizations including, B.A.S.E. (Building, Antenna, Span, and Earth formations), U.S.P.A. (United States Parachute Organization) and a U.S. Coast Certified 200-ton master captain. Our lord and savior, Jesus Christ was with him always and he made sure that he carried his picture of Jesus wherever he went. May you forever have blue skies and may your journey be incredible. Dad, I know there may be a lot of things that will have gone unsaid between us for now, but I know that in the end you always tried to do what was best for me and you always did the best that you could, that’s more than any son could ask of a father. I love you so much dad and I know that when we see you again in heaven we will have a lot to talk about and some fun stories to share. May the wind be ever in your sails dad, I will miss you. Kevin was preceded in death by his mother, Carolyn Isham; stepfather, Bob Isham; sister, Kerry Lynn Watkins; and numerous aunts and uncles. He is survived by his son, Evan Dale Venell; ex-wife, Shelly Lynn Venell and his father, Terry Dale Venell. Services entrusted to Eickenhorst Funeral Services.

Captain Kevin Dale Venell, 54, of Kemah, Texas passed away on Sunday, May 10th, 2015 at his home in San Leon, Texas. Kevin was born on March 27, 1961 in Wichita, Kansas to Terry Venell & Carolyn Park. Kevin lived with his mother and sister... View Obituary & Service Information

The family of Captain Kevin Dale Venell created this Life Tributes page to make it easy to share your memories.

Captain Kevin Dale Venell, 54, of Kemah, Texas passed away on...

Send flowers to the Venell family.