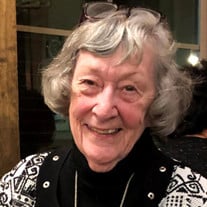 Brownie Ellis MacKie, 85, passed away at home on January 12, 2021. Born to Grady and Lilamae Younger Ellis in Sherman, TX on January 7, 1936, Brownie was full of life from the beginning. Early in her life, she became enthralled with the theatre, tagging along with her mom as she took various roles in the Sherman Little Theatre. She was in several productions during her high school years, graduating from SHS in 1954. Brownie married Morris Norman High, Jr., and had four children. She returned to school to complete her Bachelor's Degree in Drama from Sam Houston State University and a Master's Degree in Theater Arts from the University of Houston. She then taught high school theatre in the Conroe and Klein school districts until she retired. Brownie was also a very talented artist, painting whimsical pieces that originated from her wonderful sense of humor. She married James D. MacKie in 1994 and they lived in Florida and Colorado before returning to Texas. They enjoyed traveling extensively throughout the United States by motor home. On several trips they were joined by their grandchildren. In 2003 they moved to Montgomery, TX where she became involved in numerous activities including extensive genealogy research on her family which she greatly enjoyed, and serving on the Board of the Friends of the Charles B. Stewart Library. Brownie also loved music and entertained family and friends on her piano. She also was an avid bridge player. She is survived her loving husband, Jim; sister, Jeana Pethel; her four children, Craig High, Jeana Rodgers, Eric High, and Ross High; step children, Robb MacKie and Maria MacKie; 8 grandchildren and one great grand son. According to her wishes, she did not desire funeral services, but received a simple burial at her family’s plot in her hometown of Sherman, TX. Memorials may be made in Brownie's name to the Friends of the Charles B. Stewart Library; P.O. Box 524; Montgomery, Texas 77356 or the American Cancer Society.

Brownie Ellis MacKie, 85, passed away at home on January 12, 2021. Born to Grady and Lilamae Younger Ellis in Sherman, TX on January 7, 1936, Brownie was full of life from the beginning. Early in her life, she became enthralled with the theatre,... View Obituary & Service Information

The family of Brownie Ellis MacKie created this Life Tributes page to make it easy to share your memories.

Send flowers to the MacKie family.