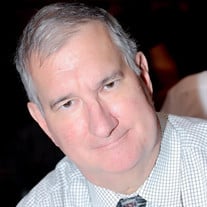 Brian Dale Harrison, age 58, passed away on April 12, 2021. He was born on April 25, 1962 in Bloomington, MN, where he lived until his family moved to St. Louis, Missouri. His family then relocated to Winter Haven, Florida and Brian graduated from Winter Haven High School in 1980. Brian was on the golf team and continued enjoy playing golf as an adult. He first attended Florida Southern College before transferring to Florida State University in Tallahassee, Florida and receiving his BS in Business Management and his Masters in Business Administration. After graduating, he accepted his first position with Conoco and moved to Houston, Texas to begin his career. Brian enjoyed a 25-year career in the oil and gas industry. He accomplishments included project leadership, contracting, procurement & supply chain management. He worked at Conoco, Conoco Phillips, BP & Invista. He also worked for HP/Compaq Computer and Veolia Environment. Brian donated his time and resources to various charities, but some of his favorites were Scotty’s House in Bryan, TX, Aggieland Humane Society in College Station, and Animal Rescue of Hearne in Hearne, TX. A man of faith, Brian had been active in or a member of Living Word Lutheran Church, Katy, TX; Our Savior’s Lutheran Church, Bartlesville, OK; Our Savior’s Lutheran Church, Midland, TX; and St. Mark’s Lutheran Church, Corpus Christi, TX. . Brian was passionate about scuba diving and had earned his advanced underwater diver certification. He was always planning the next Caribbean diving vacation. He was preceded in death by his mother, Gail Jane (Reed) Harrison and his father, Robert Irwin Harrison. He is survived by his son, Troy Robert Harrison of College Station, Texas; his daughter, Holly Leigh Harrison of Katy, Texas; his brother, Lee Harrison (Sharon) of Minnesota; his sister, Jaye Lewis (Edward) of St. Louis, Missouri; and his extended family and friends, Amy Harrison, Rebecca and John Elliott. In lieu of flowers, contributions may be made to Scotty’s House in Bryan, Texas, www.scottyshouse.org, Star of Hope Mission in Houston, Texas, www.sohmission.org, or to Houston Food Bank in Houston, Texas, www.houstonfoodbank.org.

Brian Dale Harrison, age 58, passed away on April 12, 2021. He was born on April 25, 1962 in Bloomington, MN, where he lived until his family moved to St. Louis, Missouri. His family then relocated to Winter Haven, Florida and Brian graduated... View Obituary & Service Information

The family of Brian Dale Harrison created this Life Tributes page to make it easy to share your memories.

Send flowers to the Harrison family.