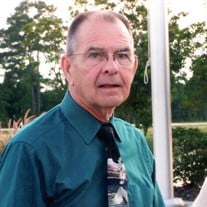 Bobby Bensey Myers went to be with the Lord on Sunday, April 19 at the age of 79 with family and pastor at his side. He was born on April 6, 1936 in Maybeury, West Virginia, to Anna & Fred Myers. He was the youngest of five children, and his father was a coal miner. Bobby’s father died when he was very young, and the family moved to Louisiana a short time after. He met Corinne in high school, they married just after she graduated and remained married for 59 years. To see them together, especially towards the end as she cared for him, was a beautiful example of love: every time she walked in the room they’d look at each other’s eyes and greet with a kiss. A look between them spoke volumes. Bobby served in the US Navy on USS John A Bole from 1954-1958 and in US Reserve until 1962. During his service he received a Good Conduct Medal, ETR2, National Defense Service Medal, and the China Service Medal (Extended). Most of his professional career was at Packard Industries (which was subsequently bought by United Technologies) from where he retired after 32 years. Bobby volunteered at St. Vincent de Paul, Habitat for Humanity, and Tree of Life Lutheran Church. He had a strong work ethic and was deeply committed to serving others. He was always available and willing to help in any way he could. If he saw a need, he was the first to step up to help. He was never idle, instead he kept busy gardening, working in his yard, building swings, play houses, decks and furniture for his children and grandchildren, helping with car repairs and home improvements. Many humorous stories come from the projects that his family would take on only to end up calling him for help to correct or finish them. (“All you gotta do!”) Bobby and his wife Corinne have been members of Tree of Life Lutheran Church where he served on various boards and committees over the years. He was preceded in death by his parents, Anna and Fred Myers, his siblings; William (Buddy) Myers, Fred Myers, Dora Jean McCain, and Irma Stelly. Survived by his wife Corinne Myers, daughters; Bonnie Mason (Mike), Joi Campbell (Bob), Ginger Merritt (John), and Wendy Hickman, and extended family members Charles and Doris Fletcher, Mark Hickman, nine grandchildren, and seven great-grandchildren. He was committed to his family, who remain a close knit group that continues to grow. They have shared many celebrations and faced a fair amount of challenges, but the family is always there for each other, bound by a love and commitment Bobby taught them by modeling it in his life. An observation recently written about Bobby’s family really encapsulates what he passed on: He lived a complete life with a legacy….It [his family] has come with “life” (divorce, addiction, arguments) but “life” has never come between your family. He will be missed immensely. Services entrusted to Eickenhorst Funeral Services.

Bobby Bensey Myers went to be with the Lord on Sunday, April 19 at the age of 79 with family and pastor at his side. He was born on April 6, 1936 in Maybeury, West Virginia, to Anna & Fred Myers. He was the youngest of five children, and his... View Obituary & Service Information

The family of Bobby Bensey Myers created this Life Tributes page to make it easy to share your memories.

Bobby Bensey Myers went to be with the Lord on Sunday, April...

Send flowers to the Myers family.