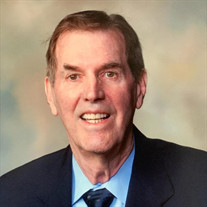 Benjamin "Gail" Sample, 83, passed away on Friday, May 29, 2020 at his home in Montgomery, TX surrounded by his loving family after a long battle with dementia. Gail was born on December 31, 1936 to Harry and Clara Sample in Advance, MO. He graduated from Advance High School where he excelled at basketball, setting a record for scoring the most points in a single game, before working on the pipeline. His attention to detail and knowledge of the industry brought him much success throughout his career. Those that knew Gail on the pipeline had tremendous respect for his skills and expertise, some even honor him to this day as "Pipeline Royalty." He began as a helper, immediately became a welder and then finished as a Foreman for the majority of his pipeline career and that is where he gained loyalty from those within the union and across the country. Gail served as a member of Pipeline Union 798 out of Tulsa Oklahoma for 64 years. His work had him travel all over the country, but he raised his family in Northwest Ohio with their mother Lilly McGill. Not only did Gail become successful as a Pipeliner, but later in his career, he used his work ethic to expand into other areas that included business ventures in Gibsonburg, OH and the surrounding area. To this day, Gail's Party Shoppe remains successful as a legacy effort which is now owned by his daughter. Among Gail's many achievements, his family brought him his greatest joy. Although he called Texas home, he continually came back to Ohio to be with his children, grandchildren, and great-grandchildren. Visits were filled with family gatherings, breakfasts/lunches/dinners at any restaurant that could accommodate his large family, and lots and lots of conversation. Gail's children include Steve (Angela), Mike (Julie), Dave (Robin), Scott, Laura (Mark Keller), and Keith (Mary) along with stepchildren Chis Mendoza, Sonia Jennings (Jerry) and Anthony Mendoza. He has 20 grandchildren and 7 great-grandchildren Gail's siblings were also an important part of his life, Hope (Lou Lorch), Nell (Charles Easterwood), Sally (Bob Parker), Bruce (Neysi), Grant (Betty), Beverly (Al Jacobs), but no one influenced him as much as his wife Blanca. His children find comfort knowing that he is finally back with her as she was the love of his life and is credited with turning a by the books, strict southerner into a gentle man. Gail was preceded in death by his sisters, Fern, June and Dixie. Special thanks to a very dedicated and loyal caregiver, Irina Sirman, for taking such great care of our Father. As the immediate family grieves and mourns, we understand the desire of friends and family to come together and support us during Gail's passing. However due to the current pandemic and social restrictions, we feel that for the benefit of public health and safety there will be no public services here in Texas and he will be returned home to his family in Ohio, where he will be buried.

Benjamin "Gail" Sample, 83, passed away on Friday, May 29, 2020 at his home in Montgomery, TX surrounded by his loving family after a long battle with dementia. Gail was born on December 31, 1936 to Harry and Clara Sample in Advance, MO. He... View Obituary & Service Information

The family of Benjamin Gail Sample created this Life Tributes page to make it easy to share your memories.

Send flowers to the Sample family.