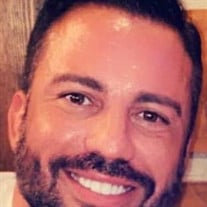 Austin J.L. Tasler, 36, passed away on March 16, 2021 from a drowning incident that occurred on March 13th on Lake Conroe, Texas. Now, as the family mourns his passing, they also celebrate all that he was to them, his relatives, his friends and all who knew him. A funeral Mass will be held at 1:30 pm, Friday, April 9, 2021, at St Anthony of Padua Catholic Church in The Woodlands, TX officiated by Father Thomas Rafferty. The family will have a private Catholic burial in Shiner, TX at a later date. The family will receive guests, close friends and relatives, and celebrate Austin’s life in a Memorial at the KC Hall in Magnolia, TX at 4:00 – 7:00 pm on April 10, 2021. Austin was born in Mobile, AL, on December 18, 1984. He was the son of Michael A. and Laurie McGee Tasler. Austin attended school at St. Mary Catholic School (Orange, TX), Little Cypress Mauriceville (Orange, TX), Caltex American School (Duri, Sumatra, Indonesia), Saint Mary’s Hall (San Antonio, TX) and graduated from McGill-Toolen Catholic High School (Mobile, AL) in 2003. He went on to study Liberal Arts and play baseball at Wharton County Junior College (honors and named Academic All American in Baseball – 2004) and played baseball and graduated from Tarleton State University, Magna Cum Laude, with a Bachelor of Science in Management in 2007. Austin had exceptional entrepreneurial skills developing successful businesses, owner/operator/agent of his Farmers Insurance Agency and owner/operator of his Jimmy John’s Sandwich restaurant in Magnolia, TX. He was well respected and loved by his customers, family, friends and anyone who knew him. Austin was the ultimate family man to his mother, father, uncles/aunts/cousins, and especially his brother, sister-in-law and 2 nieces – he adored his two nieces, including being a Godfather. He spent his life always trying to do everything he could for his family, making them proud of him, and for all those he knew. Austin was normally the center of attention and had an uncanny knack for Making Life Happen for himself and all those around him – few have experienced the world, enjoyed life and accomplished more in a lifetime – he simply would help anyone in need. Austin had thousands of friends who were enriched by knowing him. He was an athlete, unbelievably dedicated to his business/work and maintaining fitness. Austin was a baseball player, known for his 7-24 practice habits, played on scholarship in college, and completed his baseball career playing the summer of 2006 in Moosejaw, Saskatchewan, Canada. He loved his time golfing, motorcycling, boating, the lake, the Astros, working out at the gym and simply being surrounded by family, loved ones, and friends. Austin is survived by his mother and father, Michael A. and Laurie M. Tasler of New Braunfels, TX, his brother, Eric, and his wife, Sydney Shell Tasler, of Ft. Worth, TX and their daughters, Sybil and Sally, and several uncles, aunts, cousins, and friends, all of whom mourn his passing while celebrating the blessing that he was. Memorial donations may be made to the donor’s charity of choice or to be used according to the wishes of the family for Masses, Churches, or Flowers in honor of Austin Tasler.

Austin J.L. Tasler, 36, passed away on March 16, 2021 from a drowning incident that occurred on March 13th on Lake Conroe, Texas. Now, as the family mourns his passing, they also celebrate all that he was to them, his relatives, his friends... View Obituary & Service Information

The family of Austin JL Tasler created this Life Tributes page to make it easy to share your memories.

Send flowers to the Tasler family.