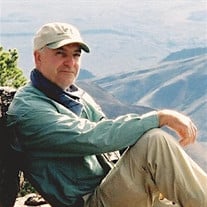 Alvin “Al” Earl Wood went home to be with The Lord on Thursday, May 26, 2016. Born to Sally Myles Varnado and Phillip Earl Wood in Franklinton, Louisiana, Al had many fond memories of his childhood spent there. Al met and married the love of his life, Cindy, in Lafayette, Louisiana and they recently celebrated their 32nd wedding anniversary together. After the births of their three beloved children, Al and his family moved to The Woodlands, Texas in 1992, which he called home for the next 24 years. Al enjoyed a successful career in the maritime industry, where his work took him all over the world. As an active member of The Woodlands United Methodist Church, he took part in many projects to help those locally and internationally, and inspired his children to do the same. In addition, Al was especially touched by his mission work with the people of Chiapas. A gifted musician with a James Taylor-doppelgänger voice, Al was an avid guitar and piano player. His highest honor was placing first at the 1966 Washington Parrish Fair talent show. Among Al’s many passions were golf, hiking, watching (and talking) all sports. He was a devoted, hands-on father who coached, travelled, and enthusiastically participated in the activities and lives of his children. Al is survived by his wife, Cindy Kidder Wood; his children, Allison Wood Abel and her husband Jake Abel of Los Angeles, California, Myles Wood of Denton, Texas and Victoria Wood of The Woodlands, Texas; his brother, Dr. Rodney (Becky) Wood; his nephews, Jake (Ashley) Wood, Jim (Amelia) Wood, John (Kelly) Wood; his niece, Lindsay (Chad) Pellerin; his mother-in-law, Rose Kidder; several grand-nieces and nephews; and countless friends he loved as family. He was preceded in death by his mother Sally Myles Varnado, his stepfather Ray N. Varnado, his father Phillip Earl Wood, and his father-in-law Raymond Kidder, Jr. There will be a celebration of his life on Sunday, June 5, 2016 at 2:00 pm at The Woodlands United Methodist Church. In lieu of flowers, contributions can be made to Mexico Ministries (www.mexicoministries.com/contribute).

Alvin &#8220;Al&#8221; Earl Wood went home to be with The Lord on Thursday, May 26, 2016. Born to Sally Myles Varnado and Phillip Earl Wood in Franklinton, Louisiana, Al had many fond memories of his childhood spent there. Al met and married... View Obituary & Service Information

The family of Alvin "Al" Earl Wood created this Life Tributes page to make it easy to share your memories.

Alvin “Al” Earl Wood went home to be with The Lord on Thursday,...

Send flowers to the Wood family.