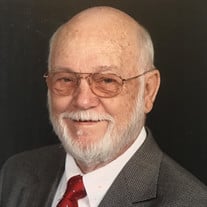 Alton “AD” Oliver, age 91, passed away on March 6, 2018. He was born on December 11, 1926 in Houston, Texas and spent his youth between Houston and Waco, where his Aunt Snooks and Uncle Herbert lived, just being a boy and becoming a young man of character. He learned the value of hard work and family at a young age. AD graduated from W.H. Adamson High School in Dallas in 1944 before joining the US Navy and serving during WWII (’44-’46) and the Korean War (’50-’52). After serving our country, he worked his way through college at the University of Houston and received his degree in 1956. He worked as a design engineer for several oilfield technology and equipment companies and would head up and lead many of those departments. AD was a U of H Alumnus, a professional engineer and a member of A.S.M.E. A man of faith, he was also a member of Allendale Baptist Church in Conroe. He was preceded in death by his parents, Leonard Dean and Velma Bolin Oliver; his sons, Craig Oliver and Tennie Sliter Jr; his sister who died at the age of 10; his Aunt Snooks and Uncle Herbert Gunn; and his uncles, George and Cecil Bolin. He is survived by his wife, Maria Oliver; children, Brad, Jeannie, Herbert, Andrew and Richard; and many grandchildren and great grandchildren. Friends are invited to visit with the family beginning at 11 am on Tuesday, March 13, 2018 at Allendale Baptist Church, 14535 Allendale Lane, Conroe, Texas 77302, where a 12 Noon funeral service will be held. Graveside services and interment will follow at 2:15 pm in the Houston National Cemetery. For those desiring, contributions may be made to Allendale Baptist Church’s benevolence fund or to the charity of your choice.

The family of Alton AD Oliver created this Life Tributes page to make it easy to share your memories.

Send flowers to the Oliver family.