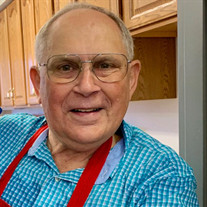 Albert John Phillips, age 78, passed away unexpectedly on February 26, 2020 at his home in Spring, Texas. John was born on February 25, 1942 in Urbana, Illinois, where he grew up working on his family’s farm. In his childhood, he enjoyed hunting and developed an early interest in anything mechanical. He played football and wrestled at Urbana High School before receiving a B.S. in Mechanical Engineering and a Master of Business Administration degree, both from the University of Notre Dame. John served his country during the mid-1960’s in the U.S. Army National Guard. Following his service, he lived in Crawsfordville, Indiana, where he earned a pilot’s license, flying and repairing airplanes as a hobby in addition to beginning his career in engineering. In 1978, he moved to Spring, Texas to continue his career with several of the oil companies in the Houston area. He also began a lifelong career in entrepreneurship, beginning as a part owner of a hazardous waste company, where he enjoyed traveling and making friends worldwide. Throughout his life, John also owned and operated several other businesses, most recently operating Summit Enterprises. In his spare time, he rebuilt aircraft and large boats, and loved deep sea fishing, scuba diving, and navigating the coastal waterways of the Gulf of Mexico and southern United States. Perhaps more than anything, though, John was known for his deep love for his family and friends. He never met a stranger and was always the first person to offer to help someone else. John had a knack for storytelling and cooking, making him the life of every gathering of family and friends. He was preceded in death by his mother, Annabelle Smith Phillips, and father, Lawrence Phillips. John is survived by his step mother, Jean Phillips of Lafayette, Indiana; siblings, Don Phillips and wife Donna of Springfield, Missouri, Donna Marrs and husband Jay of Tulsa, Oklahoma, William Phillips and wife Janet of Mitchell, Indiana, Linda Higginbotham and husband Brian of Seymour, Indiana and Robert Phillips of Lafayette, Indiana; aunt and uncle, Edith and Warren Gordon of Homer, Illinois; and numerous nieces and nephews. A memorial service will be held on Tuesday, March 3 at the Renner-Wickoff Chapel in Urbana, Illinois. Visitation will begin at 9 a.m. and the service will immediately follow at 11 a.m. Burial will be at Mt. Olive Cemetery in Mayview, Illinois.

Albert John Phillips, age 78, passed away unexpectedly on February 26, 2020 at his home in Spring, Texas. John was born on February 25, 1942 in Urbana, Illinois, where he grew up working on his family&#8217;s farm. In his childhood, he enjoyed... View Obituary & Service Information

The family of Albert John Phillips created this Life Tributes page to make it easy to share your memories.

Send flowers to the Phillips family.