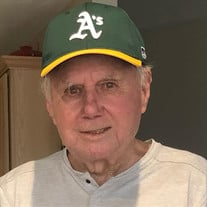 Albert Frank Janda Sr. 1927 - 2022 Albert Frank Janda Sr. was born in La Grange, Texas, and passed away in Baytown, Texas, on Friday, January 21, 2022, with family by his side. He is preceded in death by his parents, Minnie and Frank Janda, and siblings, Bohus Janda Sr., Agnes Janda, Judy Barta, Maggie Barta, and Rose Schramm. He came to Houston at an early age to work and then enlisted in the Marines, serving from 1945 to 1948. He married the love of his life, Billie June Simmons, on April 1, 1950. (Yes, it was on April Fools’ Day.) They were married for over 71 years. Upon his discharge from the Marines, he moved to Houston, Texas, and started working at The International Longshoremen’s Association Local 1273, later becoming Local 24, retiring from them after a long and very successful career. He brought both his sons down to the waterfront to follow in his footsteps. He was able to enjoy over 35 years of retirement. He was always a hard worker on the job and around the house. He loved the outdoors, traveling, and working in the yard. He loved his family and being with them. He was a great father, grandfather, great-grandfather and great-great-grandfather. He is survived by his wife, Billie June; sons, Albert Janda Jr. (wife Sue) and David Janda Sr. (wife Donna); brother, Alphonse Janda (wife Ladelle); grandchildren, Shannon Lee (husband Jerry), Wendy McClain (husband John), Shela Preiss (husband Morgan), and David Janda Jr. (wife Lyla); great-grandchildren, Elizabeth Couvillion (husband Daniel), Rebecca Maddox (husband Michael), Kasie McClain, Raeann McClain, Corgan Preiss, Rowan Preiss, and Angelica Janda; and great-great-grandchildren, Thomas and Anna Rose Couvillion.

The family of Albert Frank Janda created this Life Tributes page to make it easy to share your memories.

Send flowers to the Janda family.